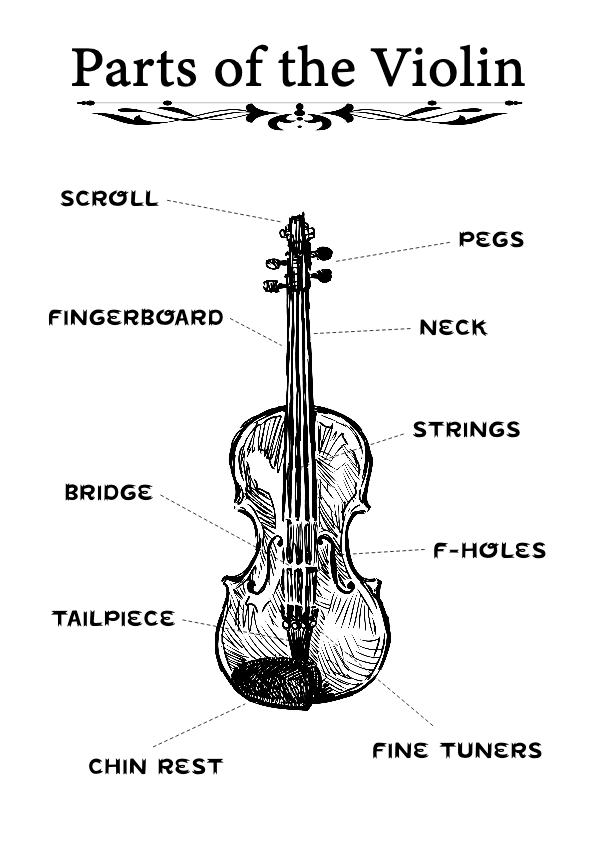 Violins are beautiful, fascinating musical instruments so it’s easy to get carried away with just how much there is to know about the instrument itself; how it works, how it’s made, what all the parts are called, what they do, and so on.

But when you’re starting out with the violin, there are really only a handful of key parts that you need to know about. These parts are important to understand from the beginning because the way they are set up CAN affect how you play.

There’ll be plenty of time later on to learn about how violins are made, maintained and repaired. So in this lesson we’ll just focus on the parts of the instrument that will actually have an impact on your playing as you get started with your learning.

As we examine the violin, I’m going to explain the NAME and also the FUNCTION of each key part. That’ll prepare you to handle the most common issues that could arise when you’re getting started for the first time.

Parts of the Violin

Let’s start at the top. This is the scroll of the violin, and although it’s very beautiful, it doesn’t really have a purpose other than to look good! 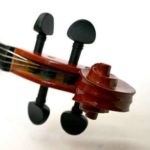 That said, the scroll is an opportunity for violin-makers to show off and demonstrate their craftsmanship, so it does form an important part of each violin’s identity!

We also need to turn the pegs when removing or installing strings on the violin. That’s quite a complicated thing to do, and we’ll be looking in detail at how to do that in a later video.

Most of the time, you’ll only want to make SMALL adjustments to the string tension. To do this, we’ll generally use the FINE TUNERS, which are attached to the TAILPIECE.

Most beginner violins come with fine tuners already installed, but if yours doesn’t, then it’s definitely worth considering.

Pegs can be quite hard to operate, especially for smaller adjustments. So having fine tuners will make it *much* easier for you to tune the instrument while you get used to how the pegs work.

The long piece of black wood on the front of the violin is called the fingerboard, and it’s usually made from a hard type of wood such as ebony. This makes it very resilient, so that it can withstand many hours of finger movements from your left hand!

The BRIDGE supports the strings of the violin. The bridge isn’t actually attached to the instrument - it’s only held in place by the tension of the strings.

You need to be very careful with this part of the instrument, as you definitely don’t want to knock it out of place! Also, be sure to check that the bridge is standing vertically on the body of the violin.

Sometimes violin bridges can start to lean over to one side, especially after you’ve tuned the strings a lot. The movement of the strings gradually pulls the bridge away from a vertical position.

If this isn’t corrected, the bridge can fall over or even snap, so it’s worth being sure that it’s standing straight.

Another common issue that beginner violinists encounter when they buy a violin by *mail order*, is for it to be shipped without the bridge being installed - or ‘bridge down position’, as some people call it!

This can be very frustrating when you just want to get started and begin to play! But it’s obviously very important not to cause damage to a violin by trying to install the bridge without being sure about what you’re doing.

If you order a violin only to find that the bridge has not been installed, then we recommend getting help from a trained luthier to make sure that the violin is set up properly.

Good ‘Instrument Setup’ is every bit as important as having good quality materials and craftsmanship, so it’s worth getting this done properly. If in doubt, contact our Learning Support team and we’ll set you in the right direction!

The holes in the front of the violin are known as the ‘f-holes’, and they are important for allowing the sound waves to escape from your violin. Otherwise, your audience wouldn’t be able to hear you properly! We’ll be talking more about this, and other aspects of sound production, in a later video.

One accessory that you’re definitely going to need is a Chin Rest. Chin rests, contrary to their name, are where your JAW rests in order to keep the violin in position whilst you play.

Violins almost always come with a chin rest already installed, however there’s a lot of variation between different types of chin rest, so you need to be sure that you’re using one that’s right for you. We’ll be talking more about this later in the course.

Another accessory that’s extremely important is a Shoulder Rest. Nowadays, most violinists use a shoulder rest, because it helps to secure the position of the violin against your body, which makes playing much more comfortable.

We’ll guide you through the process of finding and using a shoulder rest in a later video. In the meantime, be aware that there are different types of rest and that an important part of the setup process should be choosing one that’s right for you.

Let’s meet some of the parts of the violin, and find out what they do! …

Bridge – This is the ornately carved, upright, unvarnished wooden device that holds the violin’s strings in place. It sits on top of the instrument, between the little cross-bars of the f-holes, supported above the soundboard. The bridge isn’t glued or fixed to the instrument … it’s kept in place by the pressure of the strings. So, if you loosen all the strings, then the bridge will fall off! :-/ The bridge should be pretty much perpendicular to the surface of the violin; it shouldn’t lean too far forward, or too far back … that is an accident waiting to happen! It is the bridge that transfers the vibrations of the strings into the body of the violin for amplification, out into the surrounding air, and into the ears, and souls, of your listeners! Without it, the strings would only produce a faint, somewhat pathetic, sound!

The bridge is slightly rounded, so that we can play on one string at a time. Small adjustments to its position can have a significant effect on the violin’s sound.

Scroll – The decoratively carved ‘head’ of the violin, the fancy twirly bit at the top! It’s typically in the shape of a volute (a rolled-up spiral). Sometimes human or animal heads! The scroll shows off the craftsmanship of the violin-maker, its quality a litmus test of the luthier!

Pegs – Four pieces of wood, usually ebony, used to hold the strings in the pegbox of the violin, and nicely shaped to make them easy (ish!) to turn. We use the pegs to tune the violin, turning them to tighten the string – raising the pitch - or loosen the string – lowering the pitch. Turning the peg only a small amount, makes quite a bit change to the pitch of the string. We need to be careful not to turn the pegs too far above the desired pitches – G, D, A, & E. Too much tension and the string will snap!

F-holes – The two openings in the upper soundboard of the violin, either side of the bridge, named as such because they’re shaped like the italic letter ‘f’. They help to project the sound of the violin more efficiently. And, they also come in handy when we want to clean the inside of the violin … pour rice through the f-holes, give the violin a good old shake, and then empty out … complete with dust balls!

Chin rest – The specially shaped device, attached at the front-bottom of the violin, that allows the instrument to be held comfortably under the violinist’s jaw (it should really be called a jaw rest!). There are lots of types of chin rest, shaped differently, positioned differently, and of different heights. It’s important to find one that’s comfortable, matching the contours of your face!

Tailpiece – The component of the violin that anchors the strings in place, opposite the pegs around which they are wound.

Fingerboard – The smooth playing surface (usually made of wood) under the violin’s strings. Pressing the string down onto the fingerboard changes the vibrating length of the string and thus changes the pitch of the note produced.

Strings – Strings were first made of sheep gut – eeeew! - commonly known as catgut, even though it didn’t come from cats! Modern strings may be gut, steel, or various synthetic materials, sometimes plated with silver. The violin has four strings, tuned in perfect fifths to the notes G, D, A, and E. G is the lowest and thickest string … then D … then A … and E is the highest and thinnest.

Parts of the Bow

The stick of the bow is usually made of wood, although nowadays some violin bows can also be made out of carbon fibre.

Bow hair is usually made from the hair of a horse’s tail, although alternatives that do not use animal-based products are also available. The tension of the bow hair is adjusted using the SCREW, which is the name we give to the rotatable bit on the end of the bow.