How To Practise Scales

How To Practise Scales

Start with the core musical elements

The basic building blocks of music are rhythm, pitch, and sound. When a scale is played well, the pitch is even so all of the notes with the same name in different octaves are in tune with each other. The tone quality and rhythm are even, not disturbed by bow changes or shifts. Evenness does not mean that the scale is robotic. Each note has its own musical character.

Once you have practised your scale so pitch, sound and rhythm are all good, the next thing to go for is to make it feel easy. Simon Fischer suggests that a nice way to do this is that each time you do something well, you should then see if you can achieve the same result with half the effort, then half the effort again. He says that until you can play something well with little effort, there is still room for improvement.

Instead of practising your scales as complete figures, work on the elements of each scale. The scale can be broken down into different components or “problems” such as one octave scales, shifting exercises, exercises for the coordination of left and right hands, finger preparation and finger placement. Rather than repeating a scale mindlessly over and over, search for exercises within the scale to address the particular problems you are having.

Here are some ideas for developing your scale practice…

Apply rhythms, accents and bowing patterns to all of your scales and arpeggios. This will produce the greatest improvement in the shortest time. Ivan Galamian, the famous violin teacher believed that by learning how to play different rhythm patterns you discover and repair all the weak areas where you don’t really know what to do with the bow and fingers, or where your fingers move too slowly.

Practice with different dynamics. This trains the bow for greater control. Combine crescendos and diminuendos within the space of each octave or between the bottom and top of the scale.

Play long smooth notes on an open string, for example, the A-string. Listen for the smoothness of tone. Now place your fingers on another string, such as the G-string, in a scale sequence whilst still playing the A. Try to keep the tone of the A as even and smooth as before. Build up the left hand activity to include a shift to third position and back down.

Ideas for the Left Hand

Start at the top of the scale instead of the bottom.

Practice scales within the limits of one position. This exercise is the first in the Schradieck book of scale studies and will teach you the hand positions in every part of the fingerboard. 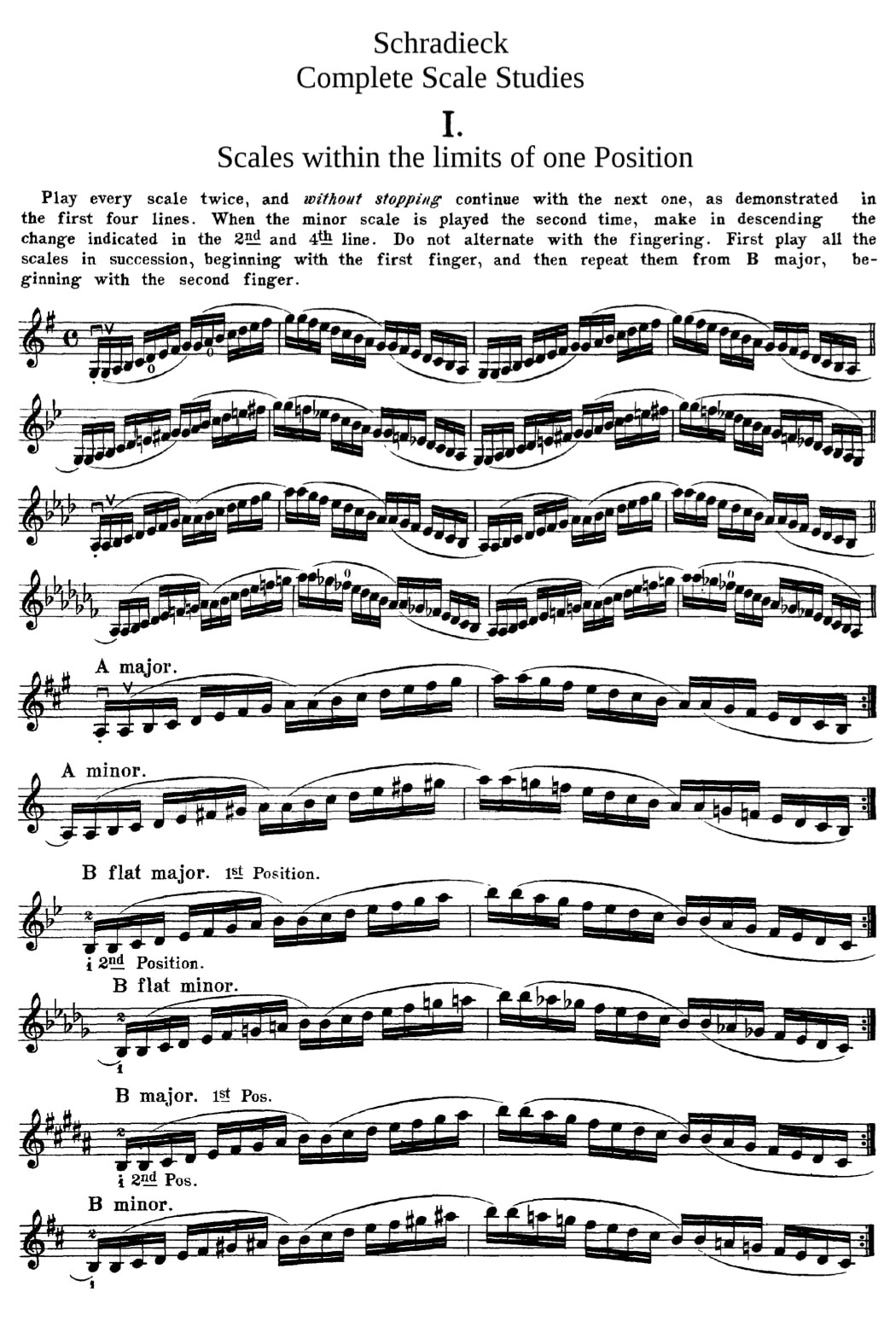 The major scale contains five whole steps and two half steps like this: T T S T T T S. If you think of this pattern as two groups of four notes that are joined by a tone, you can see the symmetry of the shape.

A scale should be built so that each note is heard relative to its position in the key. Each note of the scale has a unique hierarchical function and understanding this is important for building good intonation. The great cellist, Pablo Casals, and the famous violin teacher Dorothy DeLay both independently used this idea to devise a system for structuring the scale to hear the tuning within it.

Building the scale using this sequence is musically satisfying. Remember to try it in all the major and minor keys you are learning. It is easy to forget to work on all the different keys. In fact, when Carl Flesch first published his system of scales, it was only written out in C major, the idea being that his students would use the exercises in every key. Flesch realised that in reality many students only practised C major, so he wrote out the system in every key and even added bowing and rhythm patterns, and this is how Das Skalensystem was created.

Take a small section of your scale. Notice which fingers you can leave down and which you need to lift. By leaving fingers down you will give strength to the hand shape, making intonation more reliable, and by avoiding unnecessary finger movements you will gain an economy of movement, which is helpful when you want to play faster.

Practice a section of your scale using short, repeated fast bow strokes on each note; say four sautillé notes on each pitch. Learning to sound these short notes will improve coordination between left and right hands and the left hand fingers will learn to move faster.

“Trill” the shifts. Take an awkward shift and start working on it slowly, trilling between the two notes. Gradually speed it up to make it sound like a trill.

Practice the scale with the note before the shift missed out, instead repeating the previous note.

Identify your problem shift and isolate it. Can you find an exercise in the Sevçik book of Preparatory Scale Studies that will help you improve the shift?

Practice your shifts with “ghost notes.” Work out where the hand is going. Is there an intermediate note you can sound? This is particularly good for downward shifts where the hand is going to a position where it lands on a weaker finger. Practice these ghost notes in dotted rhythms and gradually eliminate the extra note whilst keeping an awareness of how the shift works. 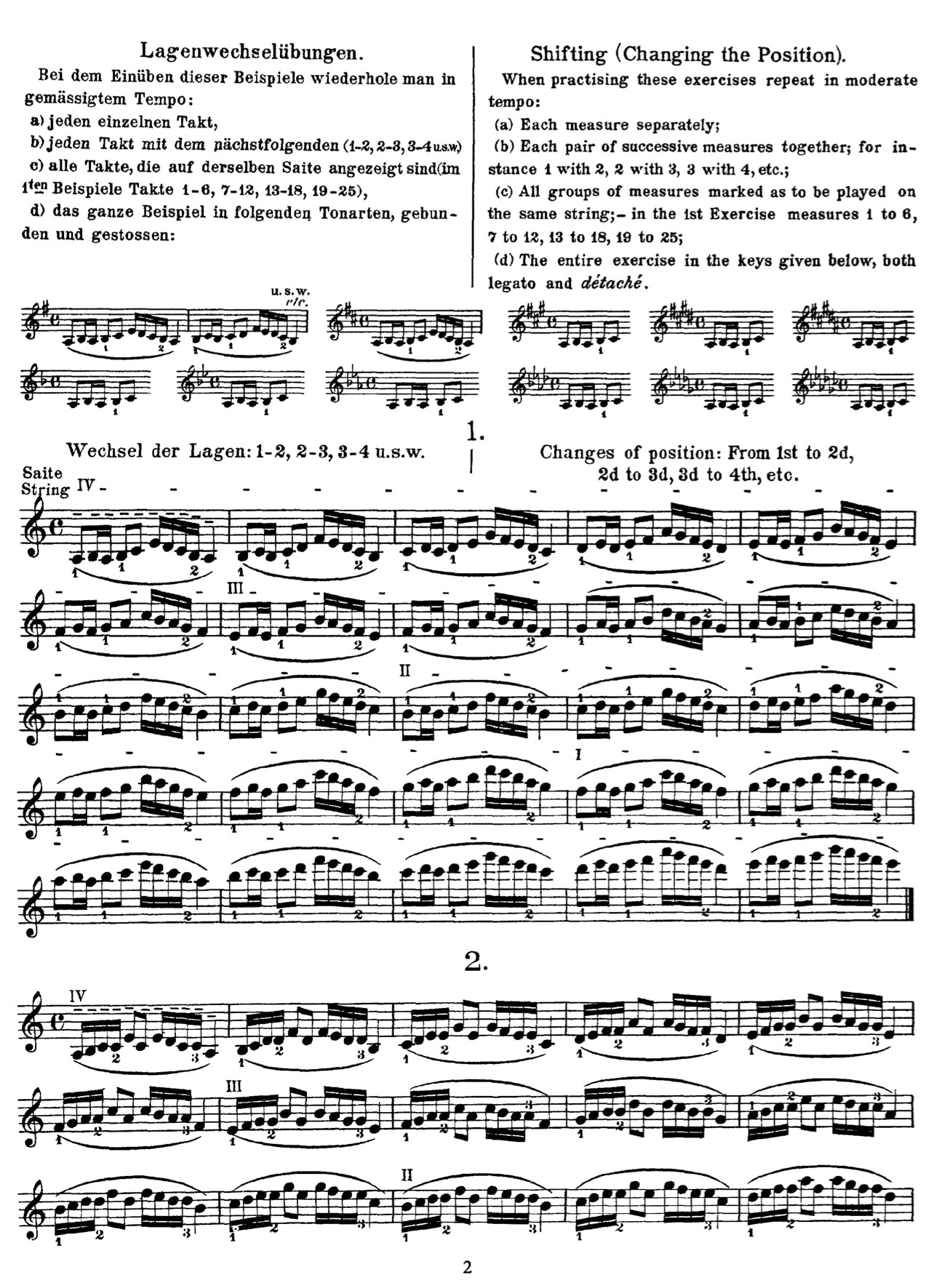 Another benefit of breaking your scales down into their separate elements is to give you a chance to learn to use your body in a comfortable, natural way. Practising long scale sequences in a mechanical way leaves no space for awareness and leaves you vulnerable to strain and injury. Breaking down your scale practice into bite-size exercises leaves the mental space for mindfulness of how the muscles are achieving the end result. This will give you better, more secure, long-term results.

In the introduction to his book of scales, Contemporary Violin Technique, Ivan Galamian explains, “The direct way to … mastery lies through working procedures which present a constant challenge to the … thinking processes. For this reason new problems must always be faced and solved.”

There are various books of scale studies available, the newest of which is Scales by Simon Fischer; a written-out practice full of comprehensive exercises for improving scale practice. There are also the scale studies by Jahnke, Hrimaly, Schradieck and Sevçik which can look a bit intimidating, but many of which contain similar ideas. For less advanced exercises try the Paul Harris series, Improve Your Scales, which are graded by the ABRSM system, so they start right at the beginning. 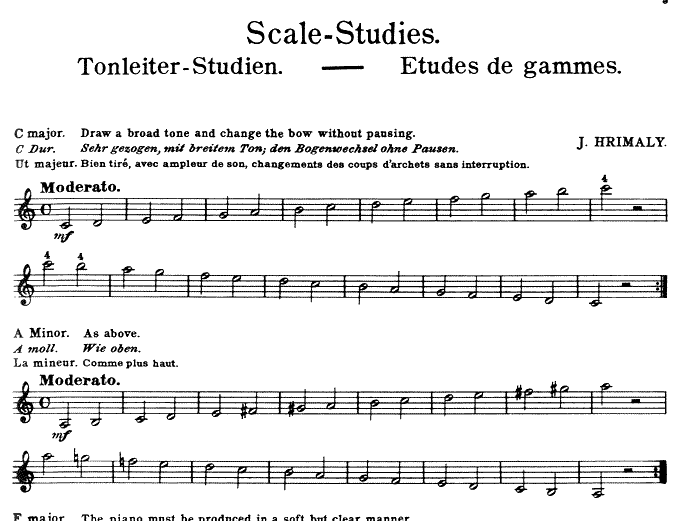 Practice in as creative a way as you can so your mind is always switched on and always learning. By analysing and exploring the elements of a scale and practising it in different ways, the original scale will seem much easier when you return to it, and your enjoyment of your scale practice will increase. There is nothing worse, after all, than practising something you find boring and not getting anywhere!