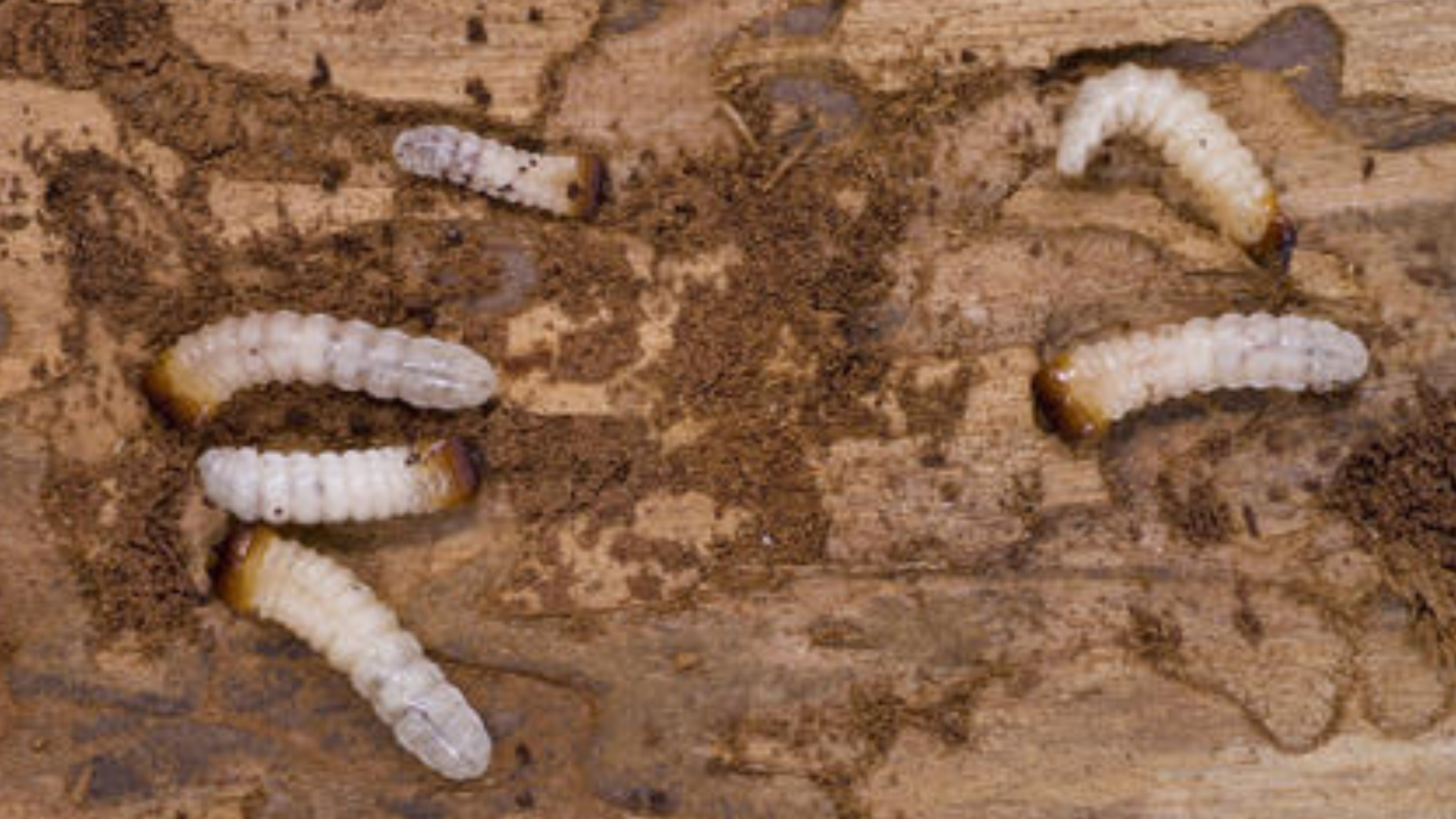 To a violinist, a violin is a beautiful work of art, whose sound can generate the deepest and most profound emotions known to humankind.

But to woodworm, a violin is a very tasty lunch!

Let's explore how woodworm can damage violins, and what you can do to avoid woodworm problems in your violin!

What are Woodworm, anyway? 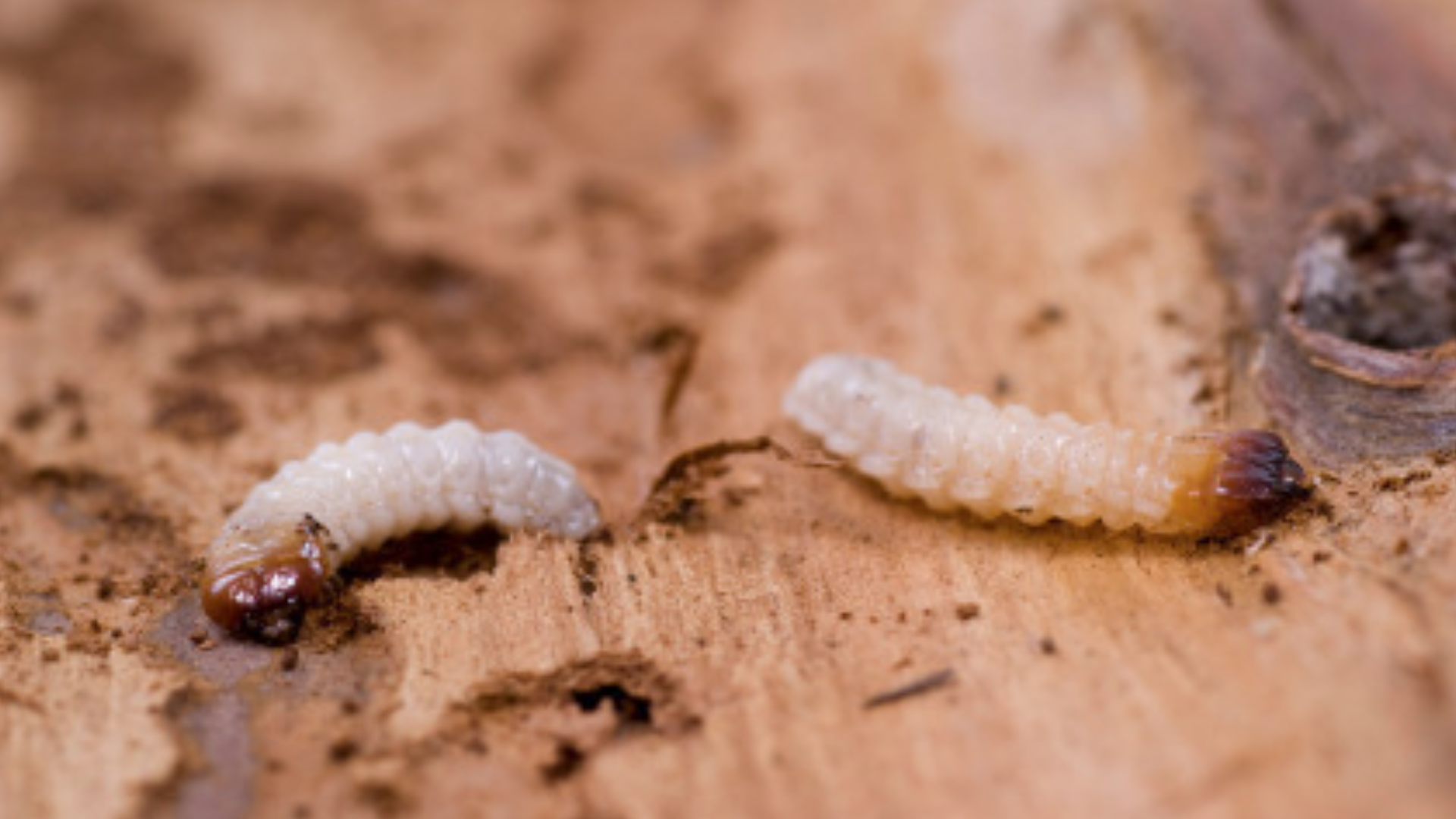 Well, they're not worms. Woodworm are actually the larvae of wood boring beetles - and a violin is a nice place for that larvae to live, before it becomes a beetle!

The wood boring beetles usually emerge from wood during the summer months - so generally between May and October in the northern hemisphere. 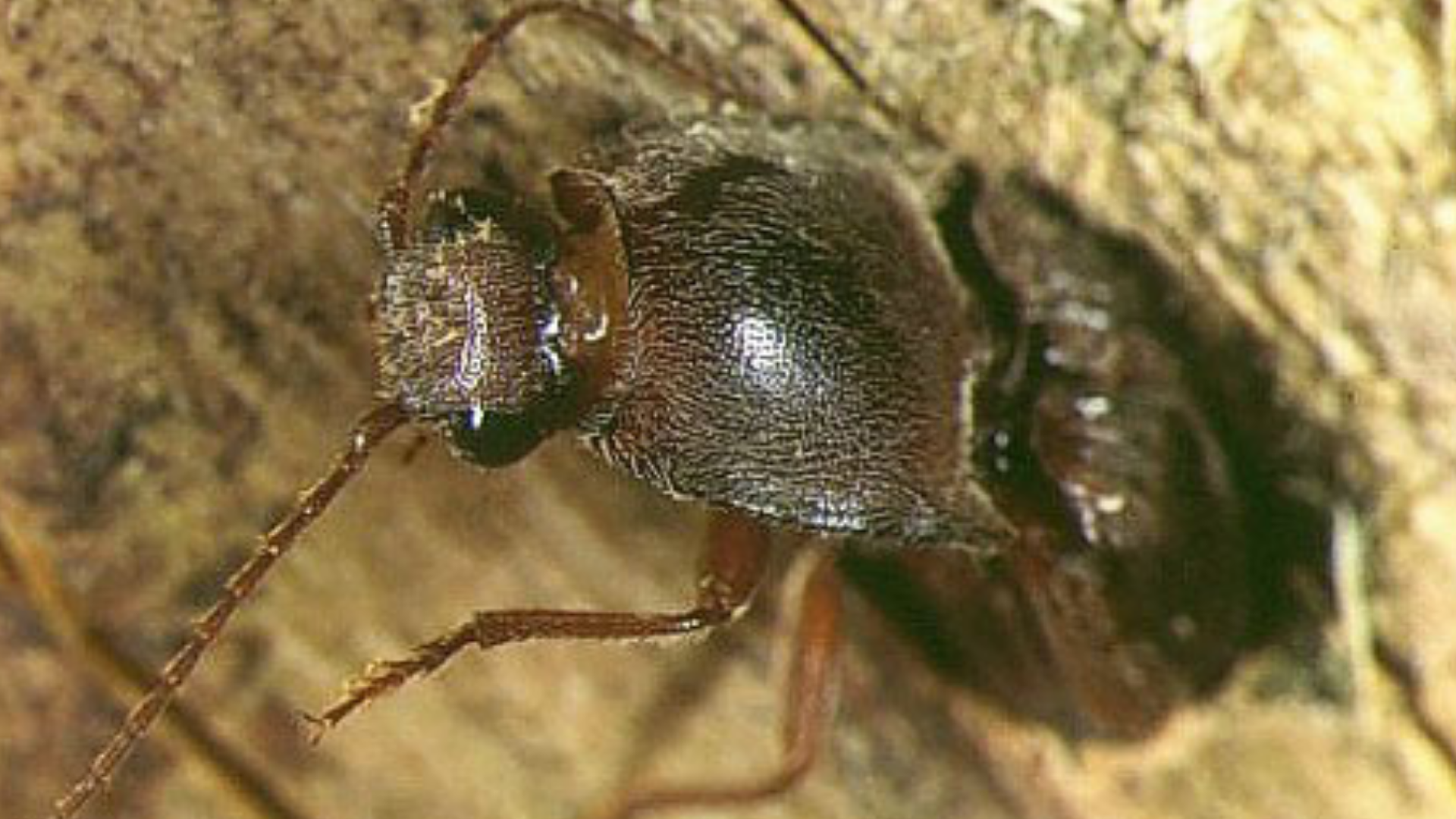 If you're aware of what a woodworm infestation looks like, then you have a chance of spotting it early... before it's too late to be treated!

The Best Conditions for Eating a Violin (if you're a woodworm!)

Obviously Woodworm love wood... but they're also attracted by humidity. So a humid violin makes for a great hot meal!

It all starts after mating, when a female beetle will look for small cracks in wood, where it can safely lay its eggs. 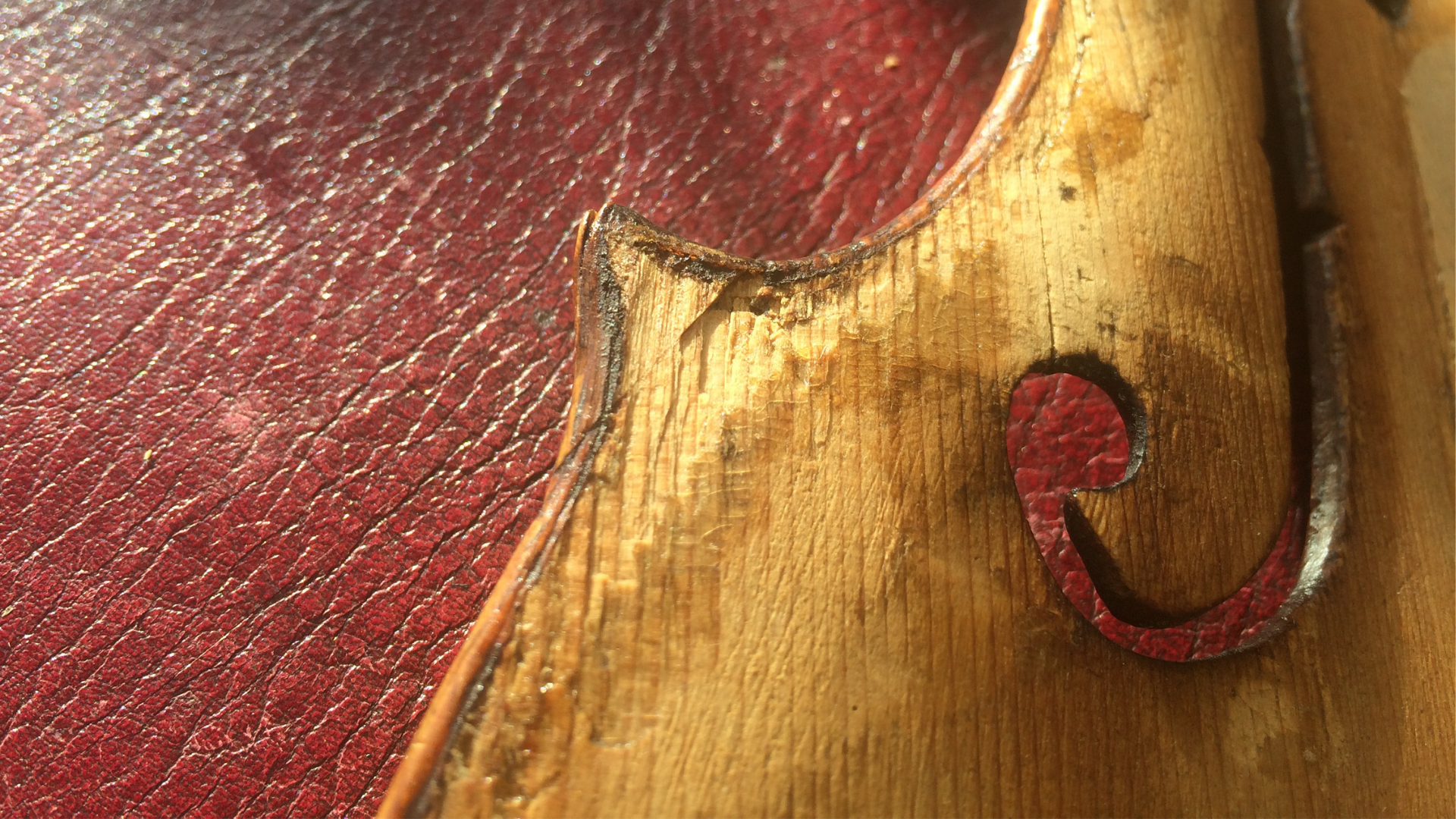 For this reason, you're unlikely to have a woodworm problem in a new or new-ish beginner instrument that's recently rolled out of a mass production workshop.

But if you have an antique violin, particularly one that's had repair work done to it in the past, this is definitely something to be aware of - particularly if you're in a humid part of the world.

Ready to Hatch... and Munch!

Once the eggs hatch, the larvae will burrow downwards into the wood of the violin, and eat their way up and down for anywhere up to five years! This can cause extensive structural damage.

The larvae form 'pupal chambers' - spaces where they enlarge the burrowing tunnels towards the surface of the wood, so that they have space to pupate into fully grown adult beetles. 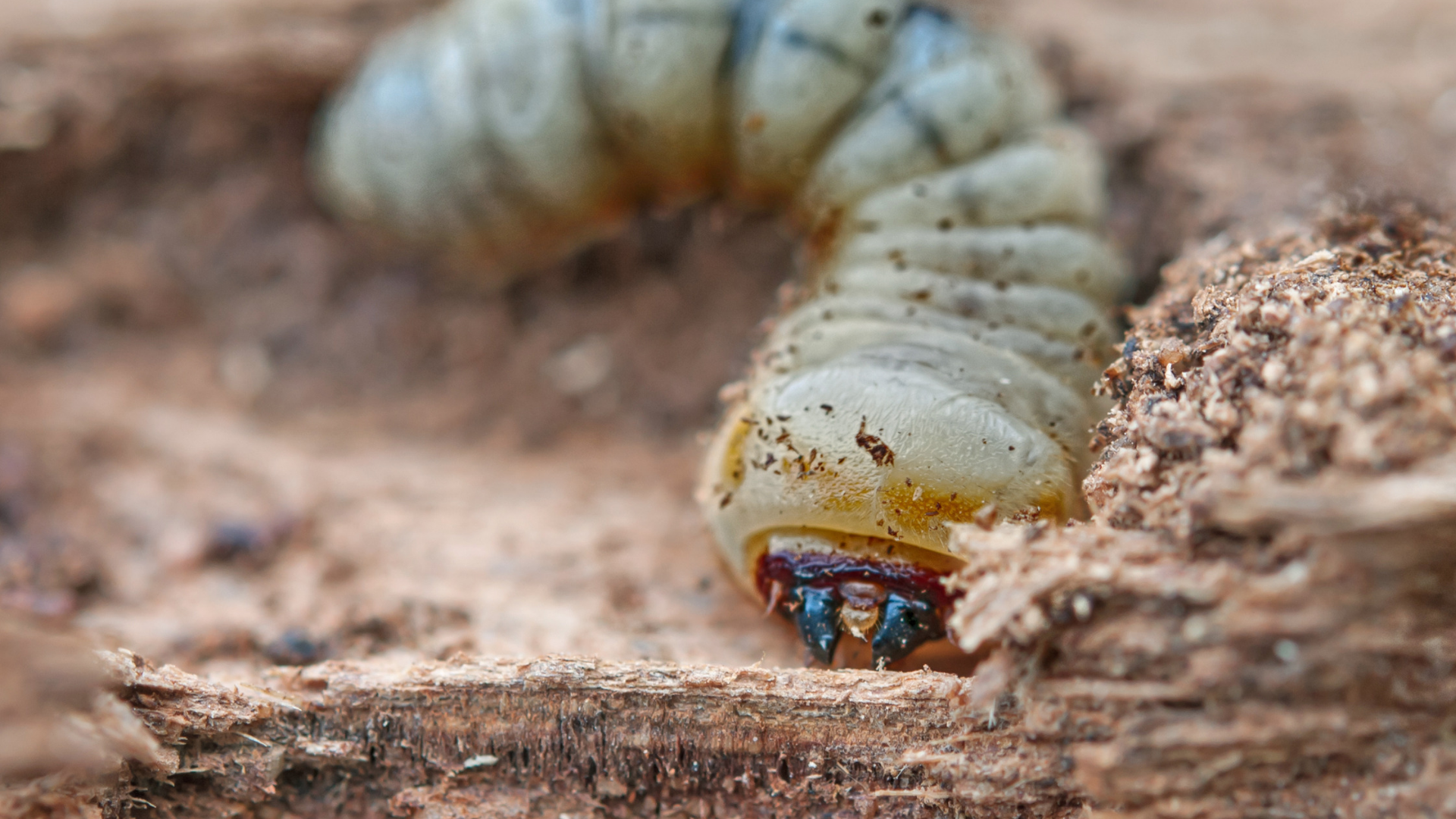 Each beetle then eats its way out of the wood, in order to search for a mate. Once they're successful, the process begins all over again.

Woodworm can cause significant damage to violins by eating their way through the wood whilst they're still in their larval stage. 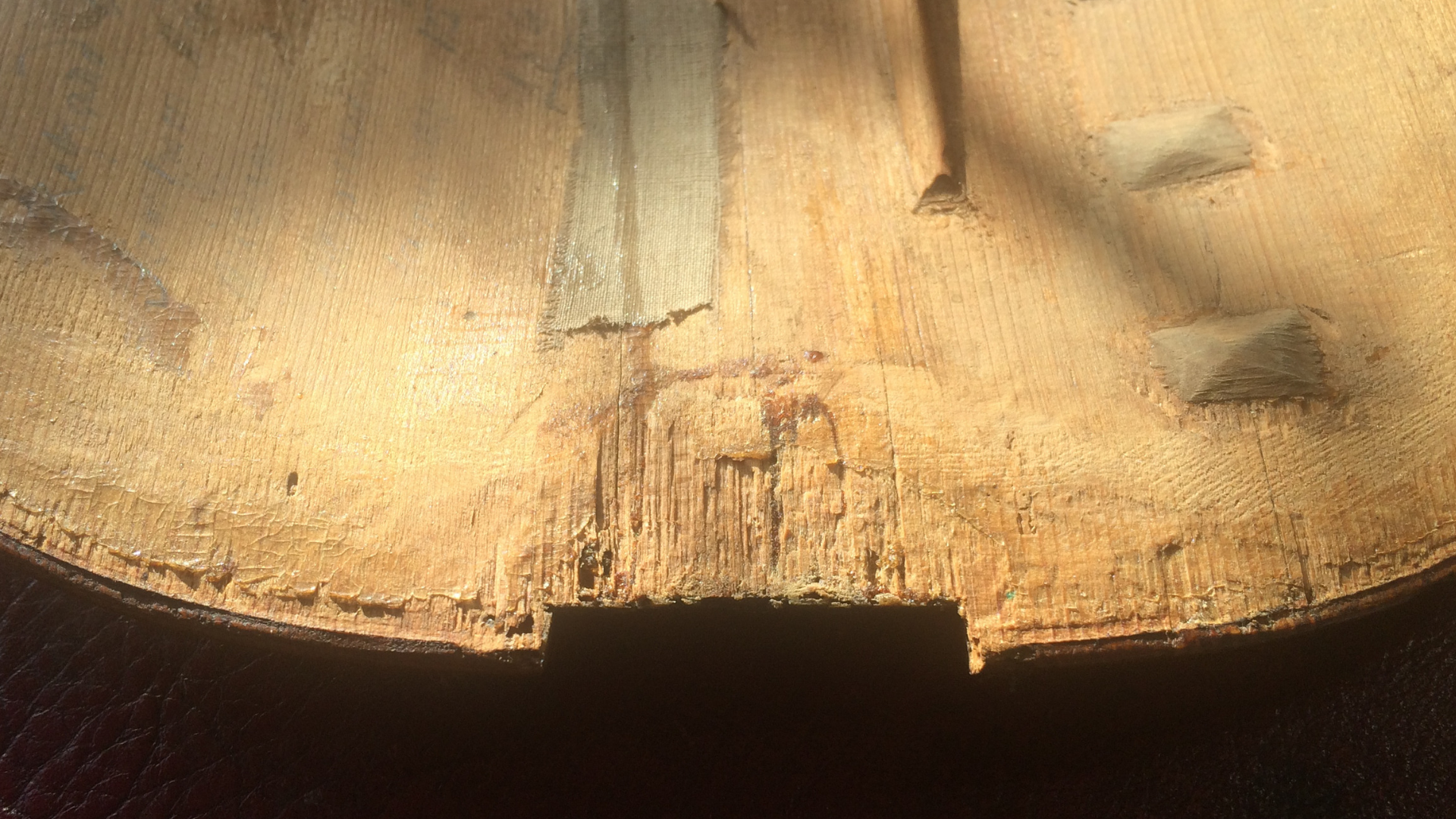 The Early Bird Catches The Woodworm

It's essential for violinists to identify the signs of a woodworm infestation before it becomes too severe, and the instrument becomes damaged beyond repair.

It's not clear whether larvae are affected by a musical instrument being played... but as far as we're aware, they don't have particularly strong musical opinions!

On a practical level, it's easier to spot woodworm deterioration if you're handling an instrument regularly, than if it's locked up in a storage unit!

That's why woodworm is a greater worry for collectors or people buying second hand instruments, than for violinists who are playing their instruments regularly.

HOW TO IDENTIFY WOODWORM

Finding Burrow Holes and Tunnels in a Violin 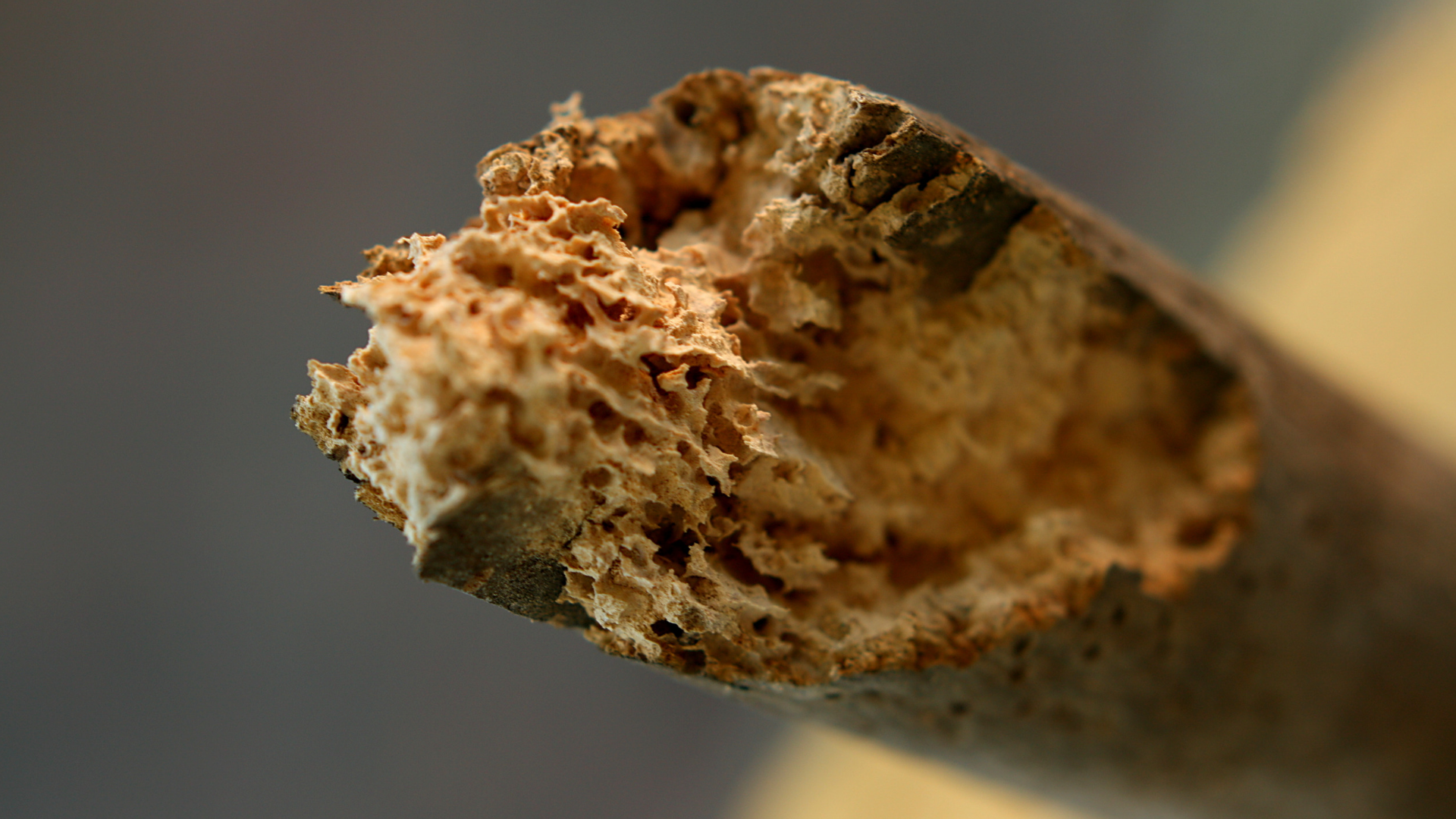 When the beetle is looking for a mate, it eats its way through the wood. On the way out, it creates a small exit hole ('burrow hole') in the violin.

These holes look similar to the holes that darts make when thrown into a dartboard! 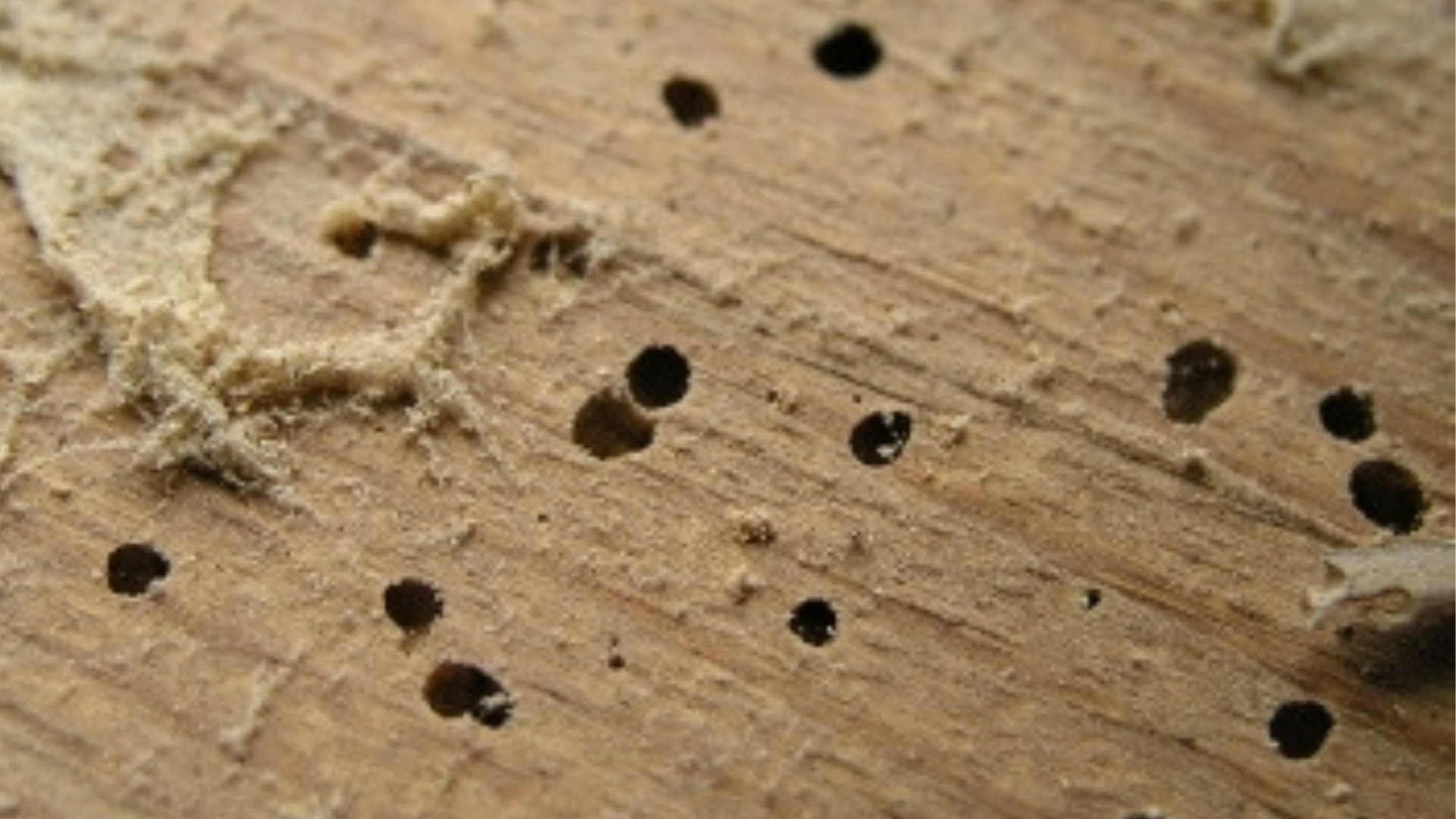 If you notice burrow holes in a violin, then you should first establish whether or not the infestation is still active.

You need to know this in order to assess the level of damage that has been caused to the violin.

Its possible that there may still be wood boring beetles inside the instrument - but this can't be determined by the burrow holes alone.

Instead, look for raised “tunnels” within the wood. These tunnels indicate the route taken by the larvae as it eats through the violin. 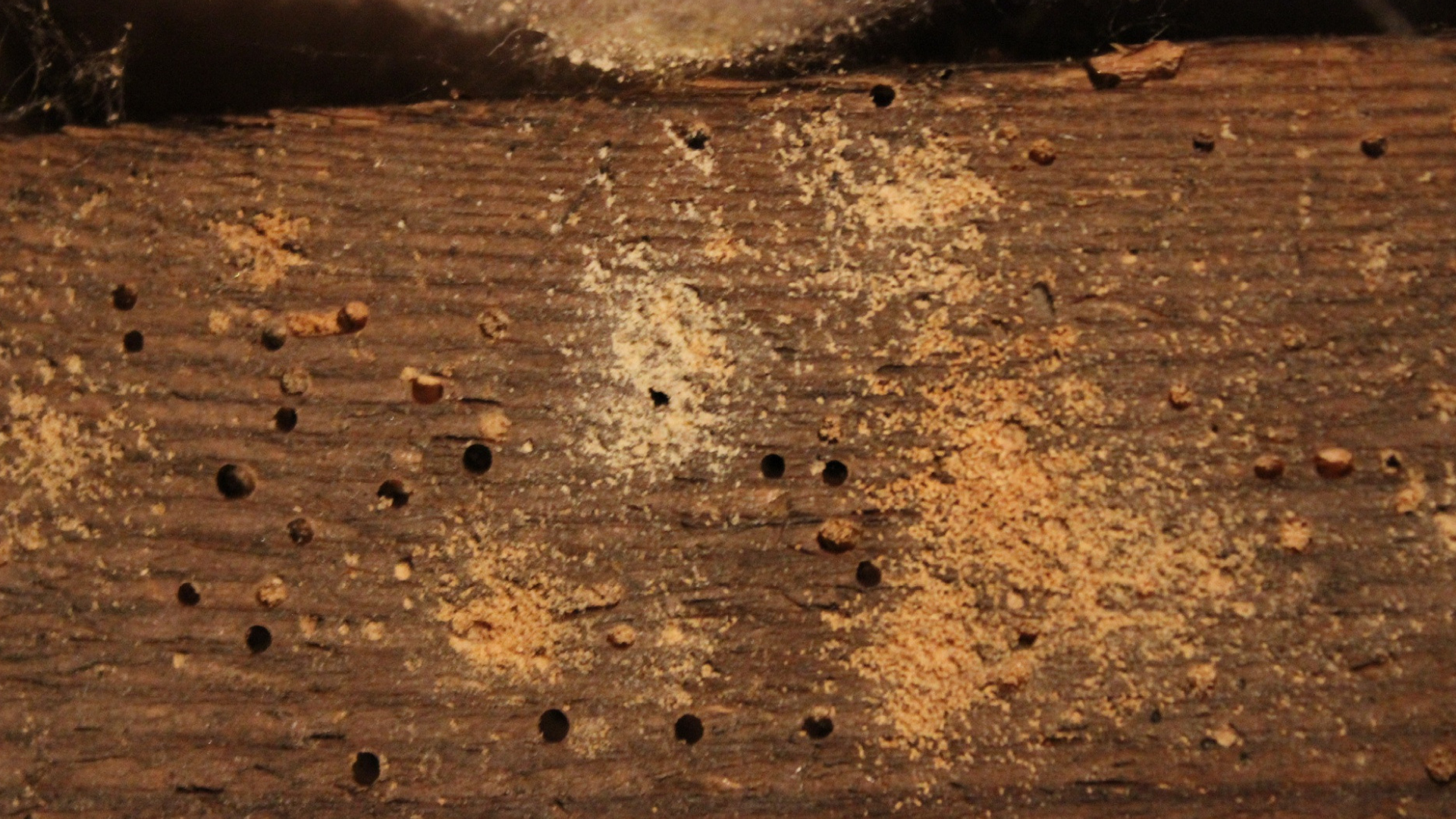 A key sign of an active infestation in a violin is 'frass', a fine powdery dust which looks like moist sawdust, and is found near the burrow holes.

This powdery dust is essentially woodworm poo! It's the faeces that the beetle larvae leave behind after they've eaten. Mmmm, delicious!

Frass is generally a sign of a woodworm infestation at the larval stage (not the result of new beetles emerging).

Over time, the number of woodworm will multiply if the infestation isn’t treated.

This will result in an increase in the amount of exit holes in the violin, making the edges of the wood appear crumbly. 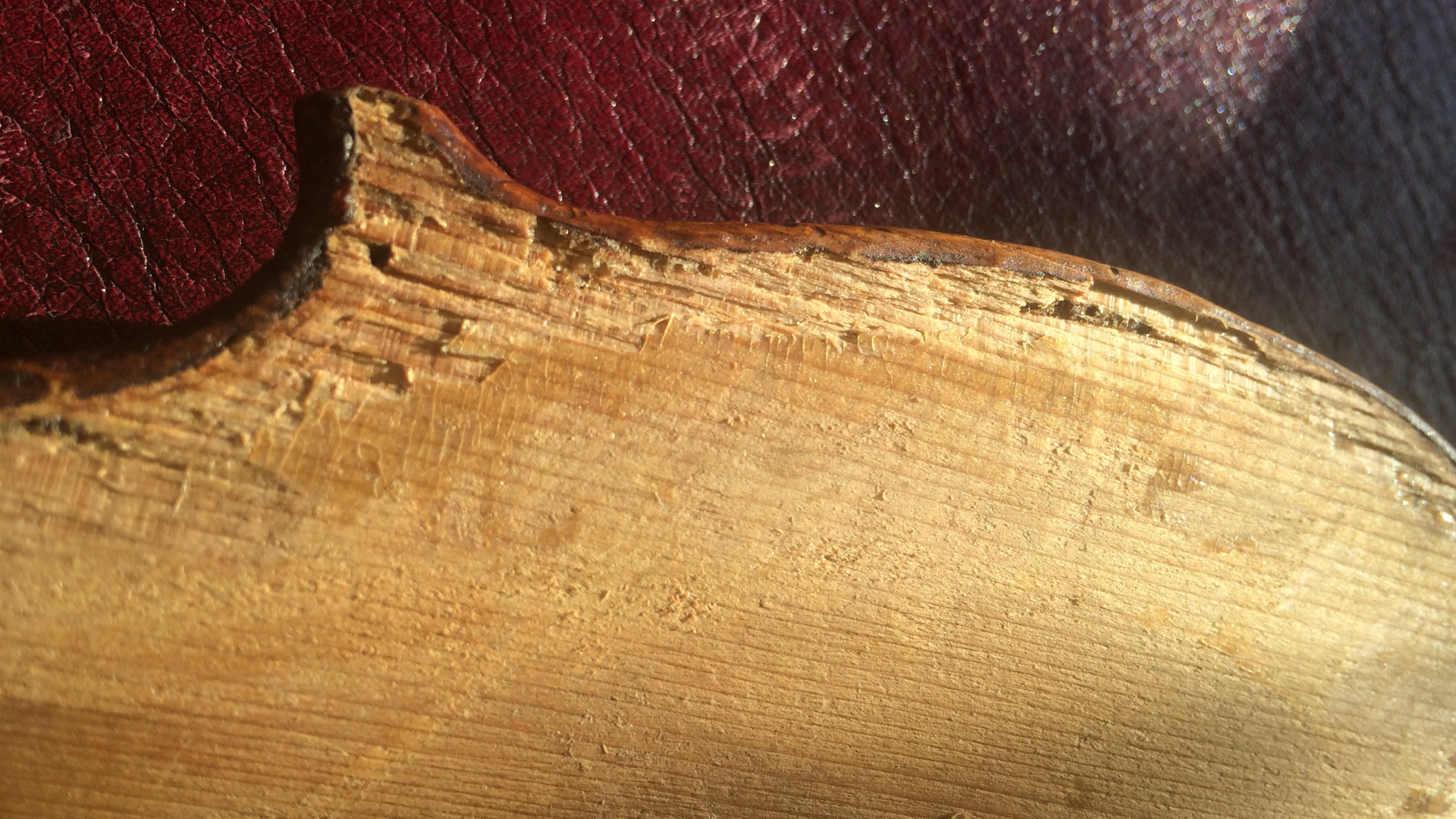 Crumbly edges indicate that the woodworm infestation has been active for a long time. In this instance, immediate treatment is necessary to prevent further damage to the violin. 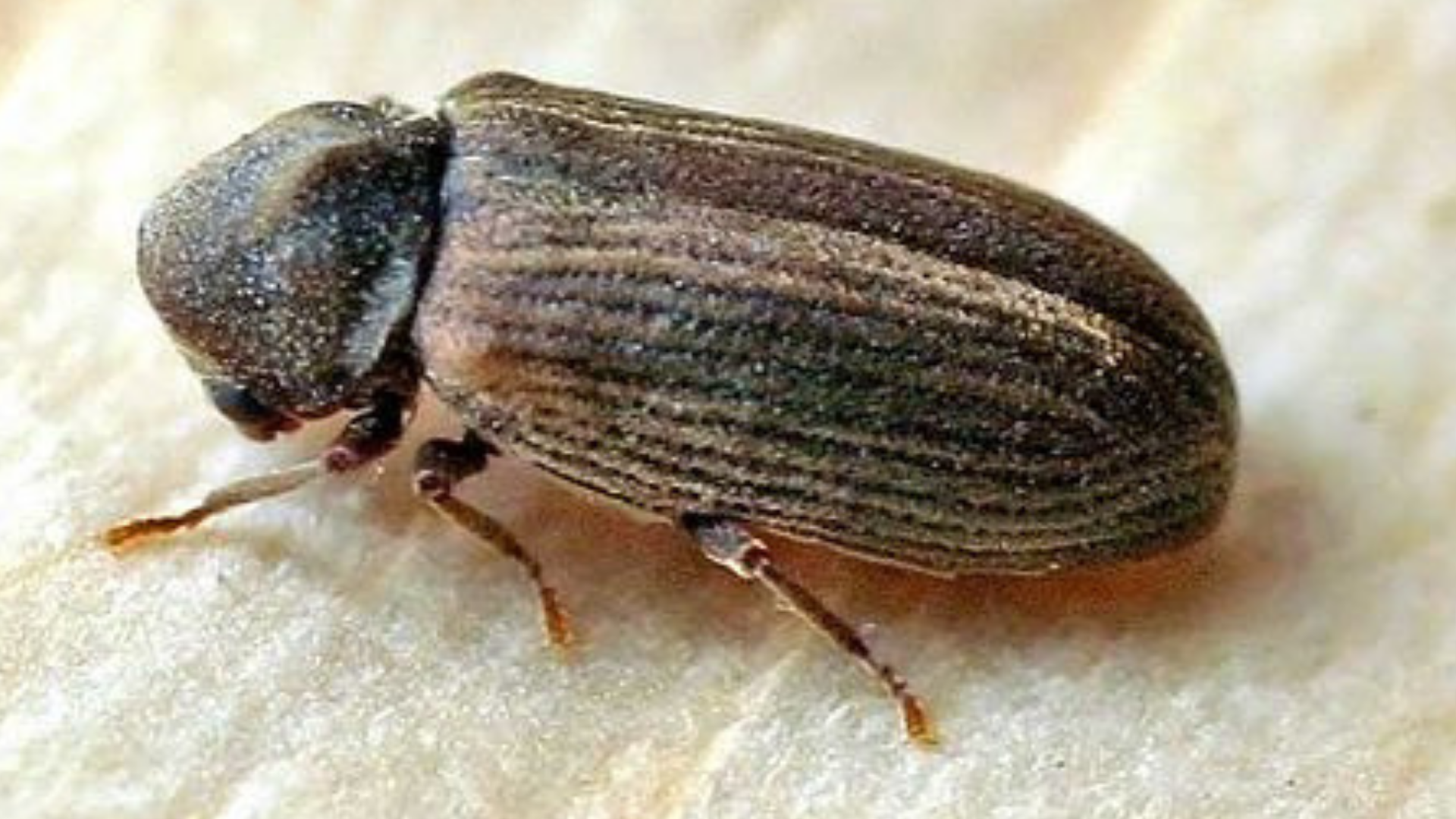 The strongest indication that your violin has suffered a woodworm infestation is if you find beetles - dead or alive! - in close proximity to the instrument.

If you actually see beetles emerging from the exit holes in the violin, then you're almost certainly dealing with an active woodworm infestation.

Beetles generally emerge from the burrow holes in summer, after having caused damage during the larval stage.

In the United Kingdom, the 'Common Furniture Beetle' (a small, brown beetle) is extremely common. These beetles are prone to dying just a few days after mating, so they can often be found lying dead near the infested wood.

WHAT DO I DO IF I SUSPECT WOODWORM IN MY VIOLIN?

The adult beetle itself causes very little damage to wood. But after mating, the female beetles will fly around in search of nearby wood to lay their eggs.

Therefore, if you notice signs of woodworm in your violin, there's a risk that if the infestation remains untreated, that it could spread to other instruments and furniture.

For this reason, it's strongly recommended to get advice immediately from an experienced luthier, as soon as you suspect woodworm in your violin!