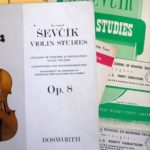 Pattern building studies for the violin are composed around simple ‘building-block’ phrases and repetitive figures, designed solely to build finger strength, agility and facility. There are many such studies in the violin repertoire, the best of which are the study books by Sevçik and Schradieck which, when practiced correctly, build left hand technique and strength comprehensively and incrementally. These books are essential supplementary material for scale and study practice and contain repetitive drills, covering all possible approaches to any particular problem.

Study of the pattern building exercises in these books hones basic skills, resolves the technical issues which hamper musical performance and leads to large jumps in technical improvement. Where a repertoire-rich practice diet can miss out the basics, covering these supplementary studies, which are sometimes shunned because they seem dull and dry, gives solid technique and avoids the need for rehabilitation in the future.

In his 1986 introduction to the Flesch Skalensystem, violinist Max Rostal explains that the best way to build intonation and facility is by practicing technical difficulties in isolation. For example, he says a problem with intonation or shifting must be approached by deciphering and improving how the wrong note is accessed. Since Sevçik’s Opus 8, Studies in Changes of Position and Preparatory Scale Studies, is the most comprehensive book on shifting that exists, there is therefore no reason why a student wishing to improve shifting, intonation and facility would avoid it.

Pattern building exercises may be considered old fashioned by some teachers, but they are designed with a deep understanding of how the muscles and brain learn, an understanding which can be explained with recent discoveries in neurological science. 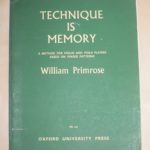 In 1959, William Primrose, the famous viola player who performed and recorded chamber music with Jascha Heifetz, published his book, Technique is Memory. In his introduction he states, “This book is not for geniuses.”

Primrose’s book is based entirely on the study of left hand finger patterns. He explains that, “To know when to put a finger in a given place at a given time; to know also its position relating to the other three fingers at that particular place and time, is to know all that is necessary in the search for accuracy.

“Technique is a means to an end,” he says. “There is no short-cut to efficiency on any instrument that will bypass systematic practice.”

His book is thoroughly systematic. It covers every key in every position, aiming to cover the entire topography of the fingerboard. Primrose explains that if technique is memory, it follows that the eye plays an important role in pattern building practice. The route is eye to brain, brain to finger, finger (or the sound produced by it) to ear and ear to brain. In his book, numbered groups of fingers are connected with symbols, designed to be filled in by the student in colour; red for semitones, green for whole-tone sequences and so on. Each scale is practiced very slowly at first and then repeated faster.  Primrose concludes that when study of the book is complete, the student should be able to recall verbally, whilst away from the instrument, the finger pattern of any scale in any part of the instrument.

The violin has a range of about four and a half octaves, or 54 semitones. There are at least 100 different places in which to play the 54 semitones, since many are playable in more than one place. It makes sense then that detailed study of the left hand patterns is required to build good intonation and knowledge of the fingerboard. We talk about muscle memory, but that is quite a lot for the muscles to remember!

Ivan Galamian explains in his book, The Principles of Violin Playing and Teaching (1962), that the foundation upon which the technique lies rests upon the correct relationship of the mind to the muscles, the smooth, quick and accurate functioning of the sequence in which the mental command elicits the desired muscular response. The greater this correlation, the greater the facility. Interestingly, neurological science has only recently been able to prove this idea, which the great violin teachers already understood and implemented in their pattern building approach.

As recently as the 1980’s neuroscientists discovered the importance of a neural insulator called myelin. Every human skill is created by chains of nerve fibres carrying electrical impulses. As these impulses are repeated, myelin, or white matter, wraps the fibres in the same way that we insulate an electrical wire. This insulation makes the signal stronger and faster by preventing the electrical impulses from leaking out.

When we practice a pattern building exercise, a neural circuit is fired and the myelin responds by wrapping layers of insulation around it. Each new layer adds a bit more skill and speed. Skill can therefore be describes as a cellular insulation which wraps neural circuits. Experiences where you are forced to slow down, make errors and correct them, repeat the same constructive piece of study many times; which is exactly how you would be approaching an exercise from a book of Sevçik; result in greater fluency.

In an interview with Daniel Coyle, author of The Talent Code, Robert Bjork, chair of UCLA explains, “We tend to think of our memory as a tape recorder but that’s wrong. It’s a living structure, a scaffold of nearly infinite size. The more we generate impulses, encountering and overcoming difficulties, the more scaffolding we build, the faster we learn.”

The more you fire a particular circuit, the more myelin optimises that circuit, and the stronger, faster and more fluid your playing will become, just as Galamian said. Targeted practice of pattern building exercises is effective precisely because the best way to build good circuits is to fire them over and over again. This is the science behind the 10,000 hour rule; the theory that to acquire mastery in any given skill, 10,000 hours of targeted, concentrated practice is required.

In his book, Practice, violinist and teacher Simon Fischer also describes how improving technique means building an ever larger collection of automatic, unthinking actions that have a desired, not an undesired effect.

Pattern building exercises are a chance to linger in the early stages of technical acquisition, maintaining a child-like curiosity for the instrument. Small children love this sort of skill mastery. A child will never seek reasons, justifications or explanations the way older students and adults do. Children are physical learners, and instinctively understand that technique facilitates more genuine responses to music. When we play musically and with inspiration, a better feeling comes into the muscles than when we play mechanically. Passion and persistence are key.In his book, Practice, violinist and teacher Simon Fischer also describes how improving technique means building an ever larger collection of automatic, unthinking actions that have a desired, not an undesired effect.This is the science behind the 10,000 hour rule; the theory that to acquire mastery in any given skill, 10,000 hours of targeted, concentrated practice is required.

To avoid over-practicing, or falling into the trap of playing these exercises mechanically, always practice with a goal in mind. What would you like to play better? Use the exercises according to your needs. Practice them regularly but only for a short, concentrated period, optimising your circuit building. The objective is not to learn a particular book of Sevçik or Schradieck in its entirety, or to get through all of the exercises as fast as possible; the reward is in the increased complexity of personal ability which comes as a result of mixing and matching the exercises with scales, studies and repertoire.

The Schradieck exercises are extremely helpful in that their focus on left hand co-ordination can be added to with variations in bowing style and technique. This exponentially increases the benefit of the work, and makes it more fun and more rewarding. In a postscript to Galamian’s Principles of Violin Playing and Teaching, former student, Elizabeth A H Green recalls how Galamian used studies as a “panorama of pertinent technique.” Various rhythms and diverse bowings were superimposed on left hand work, always creating problems for the mind to solve. The variations would become gradually more demanding, and she describes transcending technical problems as the exercises resulted in rapidly accelerated learning.

Finally, these books of pattern building studies are designed to fulfil a purpose: to provide a means of study for thoroughly learning the basis of a strong, reliable technique and an understanding of the geography of the instrument. Be careful to avoid becoming obsessive or overly perfectionist, as this will render them dull and counterproductive. This kind of analytical work can be stultifying for right-brained and creative thinkers and should only be approached in a creative, explorative and musical way. Perfectionism seems a natural outcome of something so thorough as a volume of shifting exercises, but perfectionist expectations lead to a detachment from the body and a self-apologetic approach. Repetitive work becomes less effective when we are bored, so try a random approach to repetition, working alternately on several different exercises and mixing up bowing patterns and rhythms.

Make sure you know the reason for practicing each exercise; remind yourself of your intention for practicing; observe your work carefully to ensure you are getting good results in small, concentrated time slots; play musically and enjoy the process of discovery.