So I'm deep in one of our research documents, examining some tiny detail of how the arm moves during a Tremolo stroke. I'm trying to make sure that I've got the best possible wording for an upcoming video script.

I cross-reference with a couple of our primary sources. Ah, Leopold Mozart (Wolfgang's Dad) agrees with me - he writes almost precisely the same thing in his 1756 treatise. Except... he uses the words 'vibrato' and 'tremolo' interchangeably.... ARGH!

I have one of those moments. Why do we use the word tremolo anyway? Or vibrato? Or any piece of violin-playing jargon! Why are we even trying to use words to describe this stuff? 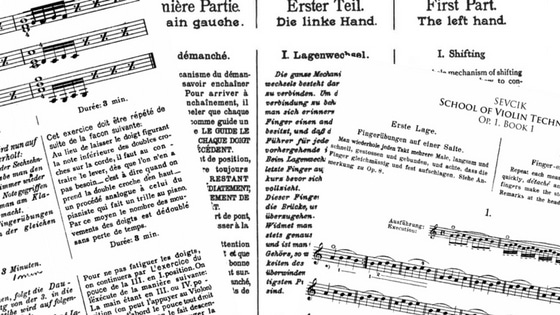 We have to, of course. Otherwise we'd never be able to communicate about what we do. But with something as complex as violin-playing, there's a limit to how useful terminology and words can actually be. Talking about violin-playing is all very well, but as with any highly intricate skill, there's a distinct reality gap between theory and practice.

The reason for this is simple: when you're working on a task that contains extremely large numbers of variables, there are an uncountably large number of potential ways to do it!

And that's why there are many ways to play the violin. Everyone's different. There's no 'right' way.

That said, there are plenty of principles which it's possible to agree on as being 'correct' or 'incorrect'... broad, measurable ideas that can objectively be said to be true for any violinist. To communicate those principles in a way that they can be truly understood, internalised and applied, then you need to talk about them... and talk about them often. And we'll be doing plenty of that in the months to come, both here on the ViolinSchool blog, and also in our Video Lessons and Online Courses.

But the way teachers talk about those principles has to be different for different people. A video or a blog or a teacher's description might resonate perfectly for one learner, but make no sense at all to another.

That doesn't necessarily make the content good or bad, or right or wrong... it's just a reflection of how each person learns. Our experience, knowledge, preferred learning styles, and so on, will all affect how we relate to, absorb and internalise information.

For that reason, a lot of terminology can be quite subjective. For example, in the 19th and 20th centuries, it was common to distinguish between different 'schools of thought' in violin-playing practice... people often spoke of the 'Russian' or 'Franco-Belgian' or 'German' school of violin-playing.

That might have held true in a pre-YouTube world, when long-distance travel was rare and ideas were slow to cross continents. But in the hyper-connected 21st Century, unthinking adherence to old-fashioned terminology is a lazily dogmatic way of communicating our art!

(We joke about this a lot at VS HQ. "Oh David... your spoon-hold is looking sooo Franco-Belgian this morning!")

Ultimately, 99% of your audience doesn't give a damn about the provenance or genealogy of your bow technique!

All they care about is that it sounds good.

It's important not to get too hung up on 'established' musical terminology; there's often quite a lack of consensus about what some of the words mean anyway! What's important is that we speak clearly and simply about what we're doing and how we're doing it, so that we can easily communicate it to anyone, anywhere!