The scale systems by Carl Flesch and Ivan Galamian are by no means the only in existence, but they have been the most widely used by violin students and teachers for many years. The systems are different in profound ways and each has valid applications for the modern violinist.

Both Galamian and Flesch were master teachers, each from a long line of violin pedagogues. Carl Flesch (1873-1944) was born in Hungary. He began playing at the age of five, and was accepted into the Vienna Conservatoire aged just 13. His students include Henryk Szering, Ida Haendel, Ginette Neveu and Max Rostal.

Flesch believed that violin teaching before Sevçik had been flawed; that Sevçik had proven that advanced technique could be a result of training and not genius. He maintained that all violinists should be schooled sequentially and defined each technical step clearly on the principle that tone quality, intonation, technical proficiency, listening and hearing skills are all things that can be taught.

Ivan Galamian (1903-1981) studied in Moscow. His concert career was short. It was speculated that this was due to chronic kidney stones which left him in great pain after every performance. Galamian used to chain-smoke his way through lessons, perhaps to diminish the pain and keep it from interfering with his teaching. He had moved to New York as the Russian Revolution gathered pace, and once there he founded the Meadowmount Summer Violin School. He also held prestigious teaching posts at the Curtis Institute and the Julliard School of Music. This clip gives some insight into Galamian’s relationship with his students.

Galamian was a consummate teacher, and once remarked, “One must make a choice – either a solo career or a teaching career. You cannot do both equally well. One or the other will suffer.” He explained his enthusiasm for teaching, “Ever since I was a child I have been interested in the how-to-do-it aspect.”

Galamian saw problems in the way violin students were taught. He disagreed with the idea that the violin must be taught from a physical angle, stating that technical mastery depends on the control of mind over muscle, rather than agility of fingers. He also felt the interdependence and relationship of the many technical elements was neglected.

Here is a video of a lesson given by Galamian, cigarette in hand, to a young Joshua Bell. Between the fourth and fifth minute, you can here a G major three-octave scale, from the Galamian scale system.

In order to see the difference in the two systems, let’s have a look at the way they are laid out.

Flesch’s Skalensystem deals with one key at a time. The entire study for that key is contained in one place in the book in sections numbered 1 through 12. 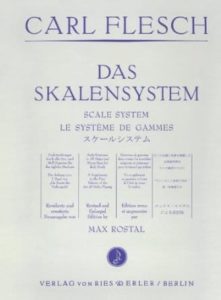 In the new edition there is some attempt to cover four-octave scales but it is not very comprehensive and serves to further overwhelm the student with material. As you progress through the book, different rhythms, bow strokes and bowings are suggested for the study of each key.

Flesch instructs that scales should be practised slowly for intonation and rapidly for facility, and that the key must be changed every day. In the modern edition, Max Rostal suggests in his preface that the key may be changed twice a week. He also explains that focus should be on the legato bowing with bowing exercises added later, as the initial goal is to develop left hand technique. Legato playing allows for the development of inaudible shifting and controlled string crossing. Rostal also suggests less time consuming programmes for studying the system, selecting parts of the designated key each day.

This is all perhaps rather overwhelming. Particularly since the advent of television and Internet we all have much less time to practice. This system would be ideal if within 45 minutes each day we were able to cover a complete key as Flesch suggests, but it is not actually possible to do! What can happen is a lot of arduous, unrewarding work and the onset of a deep hatred of scales because Flesch just seems too difficult. 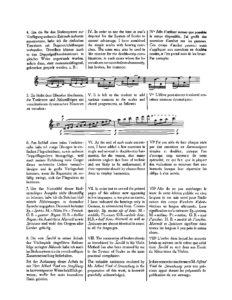 Volume One covers single stopped scales. The sections are:

The main feature of the Galamian scales which differs from the Flesch, is the Galamian turn. At the start of the three octave scales, the third note is played immediately after the first, then back to the second and first notes before ascending, so a G major scale would start like this: G B A G A B C D and so on. This turn is repeated at the end of the scale. The result of this is that every three-octave scale has exactly 48 notes, 24 on the way up and 24 on the way down. This means that the notes are divisible by 3, 6, 8, 12 or 24 notes per bow. This facilitates Galamian’s Acceleration Series. He suggests the student puts on a metronome at crotchet (quarter note) = 60 or 50, or even slower, and begins the scale slurring two quavers (eighth notes) per beat. The scale then progresses to three notes per beat, then four, six and so on. The left hand speeds up and the right hand maintains the same bow speed, but with faster, more fluid string changes. This fulfils Rostal’s suggestion that the legato playing to facilitate development of left hand technique is most important.

Once this is done, bowing patterns can be imposed on the scale. In this way, a strong foundation is laid in the left hand for good intonation in every position, and the student also has a daily outlet for working on bowing techniques.

The Galamian book is also more approachable for intermediate level players. The Flesch book looks frankly impossible to the less ambitious or advanced player, but with Galamian it’s possible to start at whatever level you have reached.

The second volume of Galamian’s scale system comprehensively covers double and multiple stops. My violin professor, Howard Davis, who had studied with Frederick Grinke, himself a pupil of Carl Flesch, used to prescribe ten minutes a day of thirds, ten of sixths and ten of octaves, played with a metronome at crotchet = 60, four beats to a note. “That’s all you need to do,” he’d say.

The purpose of practising scales is to build technique. The purpose of building technique is to facilitate more beautiful interpretation of repertoire, and scales provide the most effective targeting for this. Using scales, the violinist can work on intonation, rhythm evenness of tone, constant bow speed, beauty of tone, relaxation, breath, shifting, posture and many other aspects of playing.

Some students may prefer the stricter layout of the Flesch book, where everything for each key is in one place. Others may prefer the open ended system by Galamian, in which it’s possible to pick and choose what to cover and how. I would suggest that the Galamian system might show improvements more quickly as it is easier to be more random with the approach to practice, giving the brain new problems to solve rather than repeating a section until it is right.

These two books on the study of scales are by no means the only ones available. The newest on the market is by Simon Fischer, who has written two other books of technique, Basics and Practice. His book Scales, is designed to counteract the problems many people suffer when approaching scale practice. Fischer maintains that since the main purpose of scale practice is to build technique, it is important to work on the elements of the scale even more than on the complete scale. Instead of the traditional scale system, he gives a detailed analysis of how intonation works and provides exercises to develop shifting, string crossing and intonation within the scale. He then develops the practice in a streamlined way, connecting the whole scale together.

With any scale system, the trick is to maintain focus, discipline and creativity in practice. Perhaps the best solution is to use several different systems and take what you can from each. Sometimes we want to be challenged, at other times we want to explore.

In the context of violin study, where so much knowledge is passed on verbally in lessons, it is a huge privilege to have these works available to give us a window into the teaching of some of the greatest violin teachers, who’s approach would otherwise have been diluted or lost altogether.