If you're a vegan, can you keep to your principles as a committed violin player? If you're conscious of your impact on the environment, could violin playing be a problem?

Information about food production, sustainability, recycling and issues such as deforestation is commonly available, sought out by many of us to enable informed choices.

Many people choose a vegetarian diet because of concerns about animal welfare or the impact of livestock farming on the environment. Veganism is experiencing an explosion of popularity. In the UK, the number of vegans rose by 350% between 2006 and 2016, with the majority of vegans between the ages of 15 and 34.

Non-vegetarians are also increasingly keen to buy products that have been produced ethically. This stretches beyond animal products into the environmental sustainability of other substances, either for their impact on wildlife, such as the widely discussed problems with orang-utan treatment by producers of palm oil or for problems around species extinction and even exploitation of employees.

The violin and bow have traditionally made using very specific substances, some of which are not vegan friendly or environmentally sustainable. Alternatives are developing but there is still discussion as to their suitability.

Replacing natural products with plastic-based substitutes increases the amount of non-biodegradable material impacting on the planet – a negative effect of a positive intention.

Old instruments, particularly violin bows, are often made with materials that are now endangered  - the principal wood used for bows was pernambuco which is now listed on the International Union for Conservation of Nature’s (IUCN) endangered list - or unacceptable: Antique bows are commonly decorated with tortoiseshell and ivory. 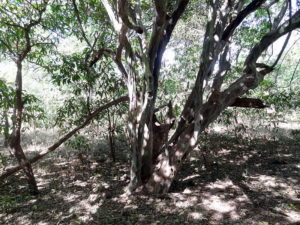 Bow makers still prefer pernambuco, but the brazilwood often seen in cheaper violin kits is actually from the same tree, the Pau Brazil– brazilwood is the lighter coloured outer sap wood from the tree, pernambuco is the heart wood.

In an interview in Strings Magazine in November 2016, bowmaker Yung Chin explained that efforts are being made to ensure the survival of the pernambuco producing Pau Brazil tree.

“The worldwide bow-making community, through the efforts of the International Pernambuco Conservation Initiative (IPCI), has been very involved with helping to find solutions whereby we can have longterm sustainability of the resources we use so that future generations of bow makers can continue our wonderful craft.”

Many carbon fibre bows are also on the market, and are often used as second/spare bows by professionals. Carbon fibre bows lack the subtlety of a really good wooden bow, but there are many models that do the job perfectly well.

Bow hair comes from horses’ tails, generally horses in cold climates such as Mongolia, where the hair grows more coarsely. Many violinists like to believe that the tail hair is simply cut from the living animal, with some people imagining ranches of horses bred purely for their hair. 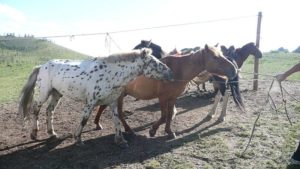 But in reality, horsehair is a by-product of the slaughter industry, with other parts of the animal being used for meat, hide and glue making.

While some would argue that using the hair, ensuring no part of the slaughtered animal goes to waste, is ethical, many vegetarian violinists are uncomfortable about the use of horsehair.

The hair used for violin bows represents only a small fraction of the horsehair industry. The vast majority of the hair is used for other purposes including as fine art paintbrushes, fabrics, upholstery, jewellery, fishing lines and fly tying.

This video shows how the hair is sorted and cleaned:

Back in the 1930’s, concert violinist and founder of the Israeli Philharmonic Orchestra, Bronislaw Huberman, was known to use bow hair made from aluminium, but it was never seen as a genuine alternative by other players. More recently, synthetic alternatives have been produced.

General consensus is that the synthetic hair does not hold the rosin so well, is smoother and plays differently from real horsehair, but the makers of the Incredibow, a carbon fibre bow with polymer filament hair, claim their bow hair should last at least 3-4 years, in contrast with horsehair which needs replacing every few months depending on how much use the bow gets.

There is still no info about recycling or what happens to the materials when the bow does eventually become unusable as Incredibow has only been in business 15 years.

While a traditional bow lasts many decades, a bow that cannot be rehaired must be discarded once the hair has worn out. Is this pro-animal at the expense of sustainability?

The increased interest in veganism has prompted development of synthetic hairs that meet the high expectations of violinists, but these are not used widely by professionals – the traditional horsehair is still felt to function better.

Opinions about synthetic hair on violinist forums are largely subjective, ranging from those who prefer it to those who think it is “truly awful.” Where real horsehair is biodegradable, synthetic versions made from plastic may have their own environmental impact.

However, the synthetic option has one clear practical benefit: Where natural horsehair will shrink or sag in different humidity, synthetic hair will not, holding its tension much better.

Other Parts of the Bow

New violin bows are often decorated with mother of pearl – the inner lining of the oyster shell and a by-product of the pearl farming industry. The mother of pearl slide on the base of the bow could be replaced with a number of materials.

Suggestions include ebony, a wood also used for fingerboards, pegs and other details on the violin. A 2001 TED case study found that 50,000 ebony trees are cut down in Kenya every year, some species of ebony are now on the IUCN endangered list and others have disappeared altogether.

There is also the option of a plastic slide that looks like mother of pearl, keeping the traditional appearance of the bow without using an animal product.

Ivory or whalebone bow tips can be replaced with plastic, but this could be deemed unnecessary, as metal (silver, gold or nickel) is also a traditional material for the inner tip of the bow. A further alternative for the vegan violinist would be to replace the leather thumb grip with a faux-leather fabric.

Originally, violin strings were made from catgut – animal (usually sheep or goat) intestines. These are still used by baroque musicians who want an authentic sound.

Metal-wound strings with a gut core are also still popular. However, so many types of violin string exist that contain no products this should not be an issue.

Good quality metal, synthetic or silk-core strings are widely available. Shop around and try different types until you find the string that suits you best.

Catgut is also the traditional material for the tailpiece hanger, though to accommodate the tension of modern strings, stronger materials such as metal or nylon are now generally used instead.

The violin is glued with hoof and hide glue, an adhesive made out of the connective tissues, bones and hides of animals (mainly cattle) that have gone to the slaughterhouse. There isn’t currently any way around this, even for the most stalwart vegan.

Hoof and hide glue is the standard glue of all luthiers. It has all the necessary properties to maintain and protect the instrument. The glue shrinks when it dries, pulling the instrument together, and it is a weak glue, meaning that when the instrument shrinks or expands with humidity and use, the glue will come undone rather than the instrument split and crack. It can also be unglued to enable repairs.

The manufacture of violins is a centuries-old tradition. Some of the original materials can be replaced by newer alternatives, and there are several options for those who want to avoid animal products.

While there is no issue with sustainability or environmental concerns such as deforestation, it is in the interests of good bow and violinmakers to source sustainably, and to take an interest in the production of their materials.

The widely held opinion is that no synthetic hair is as good as horsehair, but then some violinists prefer it, so there is no definite answer. There does not seem to be an alternative to hide glue.

For vegan violinists, for the moment at least, playing the instrument requires a compromise.

Could this change in the future? Do you know of any active research or companies working to find a fully vegan, zero-impact solution for luthiers and violin manufacturers? If so, please let us know at [email protected]