Intonation and Using a Violin Tuner as a Practice Aid

A common question asked by non-violinists is, “How do you know where to play the notes when you have no frets?”

Violin intonation is one aspect of playing that is challenging for players of every level. Beginners often start learning with stickers over the fingerboard to help with finger placement, but these marker points are generally approximate and can slide around if the glue softens, and the practise of looking at the fingers while playing can impede music reading and impact on posture.

Paradoxically, many teachers use this visual aid without explaining its temporary status, then have to implore their students not to watch the fingers. The ideal is for the student to be able to hear whether the intonation is good. It can take time to develop the ear and some people initially really struggle to trust whether or not they are playing in tune.

The dilemma of good intonation has many students reaching for the chromatic tuner, but the idea of practising with a tuner raises heated debate among students and teachers. A violin tuner – there are many models that clip onto the instrument – a digital tuning device or a tuning app from the app store is useful for tuning the strings of the violin, predominantly the A string.

Using a tuner, it is easy to settle the violin at a desired pitch, whether that be A440, A442 or otherwise. Tuning each of the four strings with a tuner would do no significant harm, but although you might consider this would make the violin perfectly in tune, it in fact will not be in tune with itself. 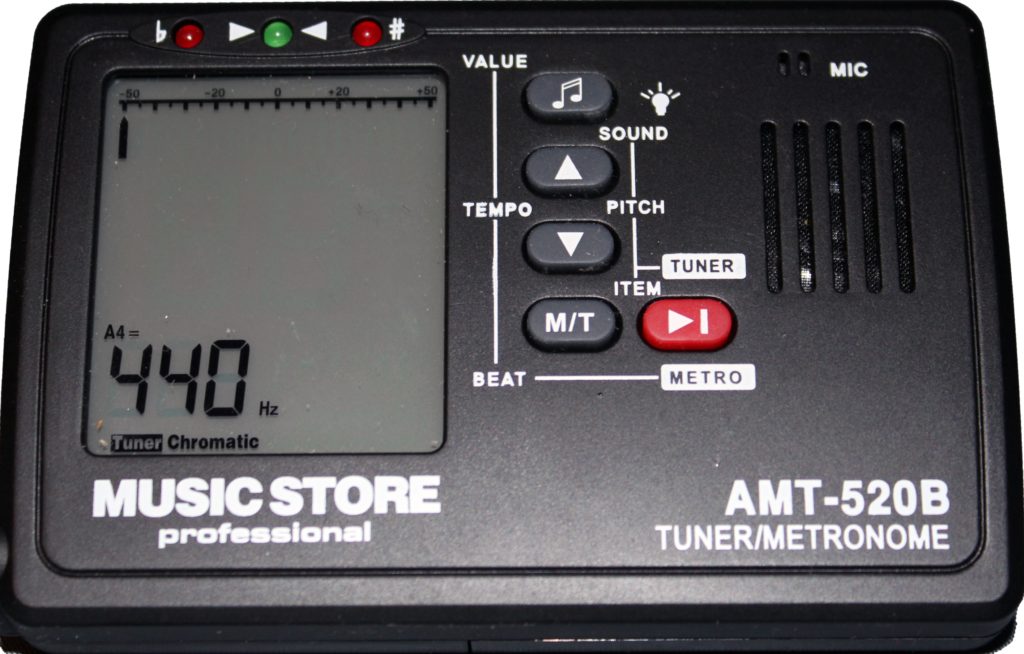 “Good intonation is both an acoustic reality, with notes “agreeing” (i.e., creating overtones or undertones) with other notes being sounded simultaneously, and a kind of societal compromise, with musicians and audiences growing accustomed to and agreeing upon a certain delineation of pitches. Professional musicians must have finely tuned ears and accurate fingers, so that they can adapt to the intonation system being used by the players with whom they are playing; but true artists must understand functional harmony as well, at times choosing to shade a note up or down to create a certain tension or relaxation.”

The system of tuning most in use today is called equal temperament. This system uses the octave, a frequency with a 2:1 ratio, discovered by Pythagoras in around 530 B.C.E. In equal temperament the octave is divided into 12 equal half-steps or semitones. This system is ideal for keyboards, atonal music and modulation. Its development in the 16th century made the progress of western classical music possible.

The problem with this system for violinists is that it does not take advantage of the acoustical properties of the instrument. Keyes explains:

With the four strings of the violin tuned to equal temperament, the instrument will be in tune with the piano but its acoustic properties will be compromised. The sound will not ring with sympathetic vibrations.

There are two other systems of tuning common on the violin – just intonation and expressive intonation.

The Pythagorean theory of intervals creates a situation where open fifths and octaves sound correct, but in a scale built solely on Pythagoras’ ratios, intervals such as thirds and sixths might sound ‘out of tune.’ In just intonation, the ratio of the third and sixth is adjusted. Thirds and sixths will have a ‘third tone,’ a tone underneath the played notes. This acoustic phenomenon enhances the sound of the violin, making it ring.

Intervals/double stopped notes that are really in tune have no beats. When intervals are out of tune you will hear a beating sound that will speed up or slow down as the intonation is adjusted. When absolutely in tune, thirds and sixths will produce an audible overtone. This method too requires certain adjustments, probably most noticeable within a string quartet. If the intervals are absolutely adhered to, the bottom C string of the cello will be wildly out of tune with the violin E strings. A compromise must be found, which in this example means the musicians of the quartet will tune their lower and upper strings respectively to narrow fifths.

Tuned using open fifths, the violin will ring beautifully, but the G-string in particular will be flat with the piano and the E will sound sharp. Generally violinists use a compromise tuning, where the G will be slightly flat to the piano and the E slightly sharp. This compromise will bring the instruments in more or less in line intonation-wise whilst allowing for the violin’s natural acoustical properties and a ringing sound. This difference in tuning will not be noticeable enough to trouble the listener.

Keyes goes as far as suggesting the following solution, which could be achieved with a chromatic tuner:

Expressive intonation is a tool of the concert violinist. It is soloistic tuning and exploits the violin’s ability to play in the gaps between tempered intervals. Sharps are raised and flats lowered to give the maximum expressive effect. One positive aspect of this method is that notes are more often in tune with the open strings, giving rise to plenty of sympathetic vibrations that produce a real richness of tone. Giving a push to expressive notes such as leading notes deepens the tonal palette, just as mixing different tones of the same colour paint gives much more richness to an artwork, and this kind of intonation makes the solo line easily audible over a whole orchestra.