Scales are basic patterns of notes, ordered by pitch, most often in ascending then descending order. Each major or minor scale covers all of the notes of the key in which it is played; a chromatic scale contains every semitone within an octave span. There are double-stopped scales in thirds, sixths and octaves, arpeggios, pentatonic scales, scales in harmonics, scales of three, even four octaves, lengthy violin scale systems, intimidating Germanic directories of scales displaying every key, every position and every conceivable bowing. Every piece of music composed between the Baroque and Romantic periods; that’s three hundred years’ worth of repertoire; is made up of scale and arpeggio patterns.

But scales are not music. Unless you are taking an exam you will never be expected to perform them. Who wants to go to a scale recital, after all? It is easy to understand why many of us consider scale practice a chore to be avoided, yet we are encouraged every lesson to spend time practising our scales.

The famous violin virtuoso and teacher Yehudi Menuhin, who made his first public appearance aged just 7, explains in his autobiography, Unfinished Journey, that as a child he considered learning an imposed method of scales, arpeggios and theory a waste of time. He learned instead by doing, acquiring the techniques for each piece as he studied it; wishing only to make music. Menuhin describes the journey he then undertook when, as he got older, determined to maintain his high performance level and also become a great teacher, he began to realise that he had skipped the basics. He had no idea how he did what he did.

To fully understand the way his fingers moved, Menuhin decided to go back, even at the risk of losing the skill he had acquired, and learned every scale there is at every speed. He learned the anatomy of the muscles in his back; he studied yoga; he sought advice from violin teachers, dancers and even gymnasts to understand how his body worked when he played the violin. Menuhin writes, “There is an advantage in establishing the top story of one's constructions first: One has seen the heights; one knows what one is building for and what must be sustained,” but “'Undoubtedly I had lost time in balking at scales and arpeggios.”

The truth is, scale practice is crucial to your violin technique, and, as Menuhin’s detailed explorations show, it doesn’t have to be boring. 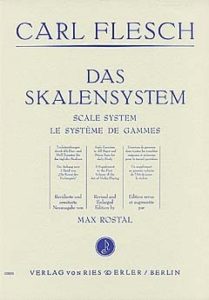 The reason scale practice works is because the brain needs repetition to learn. Neurologists have discovered that when a new neural pathway is created, which happens every time you do something new, for example when you play D major scale for the first time, insulating fibres grow around that neural pathway. When the pathway is used repeatedly, the insulating layer increases, embedding the action in your long-term memory. It takes between 30 and 50 perfect repetitions of an action to imbed it in your nervous system where it becomes a habit or skill. When we are emotionally engaged in learning, this process is much more effective. Learning the placing of first and second fingers on the A string with a mediocre tone and little enthusiasm will therefore not produce the same results as engaging fully in the idea of a ringing tone and musical outcome.

Played with full concentration and a musical approach, scales build a consistent practice routine in which you become familiar with the proper spacing of intervals on the instrument. Slow scales can be used as a physical warm up, but above and beyond this initial function, scale practice is invaluable in maintaining and developing every aspect of your violin technique.

Scale practice gives you a chance to acquire a really firm left hand technique. It builds strength, independence and dexterity in the left hand fingers. Co-ordination of left hand and bow hand improve. Touch control and sensitivity of the left hand fingers can be developed within a familiar practice pattern to avoid over-pressing, as can secure knowledge of the fingerboard and perfect intonation, a rhythmic left hand, tidy shifting and shifting with the whole hand. Mastering scales allows the fingers to learn the correct spacing in every position on the violin.

Scale practice can also be used to work on ease of playing, with focus on a relaxed bow arm, different bowing styles, full bows and purity of tone.

Ease of playing decreases risk of injury and stress, and a genuine understanding of how your technique works leads to consistent, secure performances. Familiarity with scales in every key gives a new ease to note reading and improves sight-reading, as well as improving knowledge of key signatures and tonality.

Start slowly, with the metronome, focussing on your sound, purity of pitch and beauty of tone. Enjoy the experience of listening to your own violin. Work out a clear goal or intention for this section of your practice, and engage with the process of full concentration for a short period of time. Use your scale practice mindfully and creatively. Challenge yourself to expand your technique and your understanding of how scales work for you.

So... why play scales? Because they are interesting, musical, challenging and really, really useful!