The circle of fifths is a musical theory tool that has its roots firmly in mathematics. It explores the relationships between those musical intervals that are most pleasing to the ear, based on discoveries made by the mathematician Pythagoras two and a half thousand years ago.

Pythagoras discovered and investigated the most basic facts about frequency and pitch. He found that there were mathematical ratios between notes. The octave, which is the most basic interval, the point at which pitches seem to duplicate, has a natural 2:1 ratio. If a string of a certain length is set in vibration it will produce a particular note. The shorter the string is, the more times it will vibrate per second, once it is set in vibration. When a string vibrates more times per second, the pitch of the note produced is higher. Therefore, if the string is kept at the same tension but its length is halved, it will produce a note one octave higher than the first. The same happens when you blow through a tube of air. A tube twice the length will produce a note an octave lower.

The circle of fifths, sometimes called the Pythagorean circle, is a diagram with twelve points that represent the twelve semitones within an octave. It is a chart rather like a clock face that organises all the keys into a system and can be used to relate them to one another. It is called a circle of fifths because each step of the circle is a perfect fifth from the next. The fifth is the interval that is closest in character to the octave, in that it is more consonant (less dissonant) or stable than any interval except the octave (or the unison). 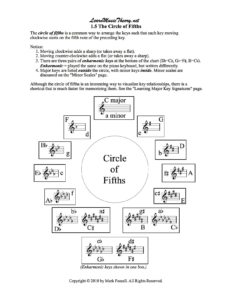 A perfect interval is one where natural overtones occur. If you play a note on your violin and listen closely, you will hear the pitch you are playing.  You will also hear overtones sounding. The most significant of these, or the easiest to hear, is usually the fifth. Where the ratio of frequencies between octaves is 2:1, the ratio of the frequencies of the fundamental to the fifth is 2:3. A perfect fifth is an interval of seven semitones. These seven semitones represent the building blocks from the first note of a scale to the fifth.

Watch this video for a clear description of how the circle of fifths is built.

The circle of fifths is useful because it shows the relationship between the keys, key signatures and chords.

It can be used to:

So what is the circle of fifths useful for?

It is possible to learn the order of sharps and flats as they occur in music by using the circle of fifths. You can work out how many sharps or flats are in a key, and also which notes are sharpened or flattened.

If you look clockwise around the circle you will see the order in which the sharps appear in the key signature. When there is one sharp, it is F#. When there are two, they are F# and C#. Three sharps will be F#, C# and G# and so on.

Looking round the circle in an anticlockwise direction shows the order of flats. If there is one flat it is Bb. Two flats are Bb and Eb. Three are always Bb, Eb and Ab, and so on.

In a circle of fifths in the major keys, C major appears at the top of the circle. C major has no sharps or flats. The next key in a clockwise direction is G major. G major has one sharp, which we now know is F#. Then comes D major which has F# and C#.  Going in the other direction, F major has one flat, Bb. Bb major has two flats, Eb major has three flats.

Use the interactive circle of fifths above to notice the enharmonic changes this creates in flat keys between, for example F# and Gb. Look at the circle in D major and then in Db major to see how the pitches are renamed. Two notes that have the same pitch but are represented by different letter names and accidentals are described as enharmonic.

The circle of fifths can also be used to work out which keys are related to each other. You can see that the keys on either side of C are F and G. Therefore, the two closest keys to C, which has no sharps or flats, are F, which has one flat, and G, which has one sharp. F and G therefore make up the primary chords in C major. F is chord IV, the subdominant, and G is chord V, the dominant. Using these three chords you can build the standard chord progression IV V I.

The secondary chords are those further away from the note of your key, so in C major, D, A and E would be secondary chords, which means they may appear in the harmony of your piece but are not as strong as the primary chords.

Watch these two clips. They explain how the circle of fifths works in major and minor keys:

Here is another clip explaining how to use the circle of fifths to understand your scales.

The model of a circle of fifths, with the consequent understanding of chord progressions and harmony and the hierarchy and relationships between keys, has played a hugely important part in Western music.

How to Hold the Violin

My Turn Next Time

I already have a violin teacher. Can I still come to ViolinSchool?

We Have Lift Off