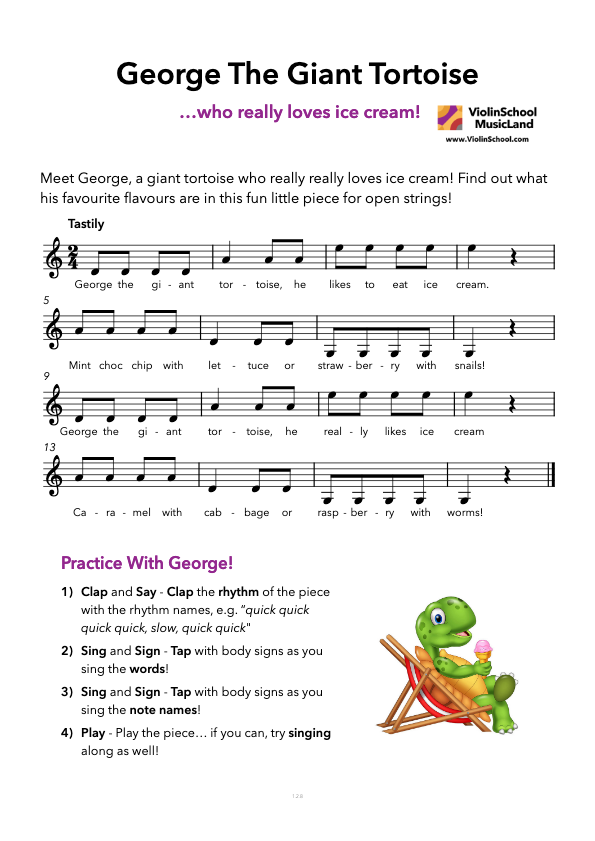 George will help you to practise your Crotchets (Quarter Notes) and Quavers (Eighth Notes), whilst making nice, smooooth string crossings!

Look for the patterns in the music - is the rhythm different from line to line, or is it the same?

Each time you need to move to a higher pitched note in lines 1 and 3, move your arm smoothly downwards to get to the next string.

Each time you need to move to a lower pitched note in lines 2 and 4, move your arm smoothly downwards to get to the next string.

Make sure you anticipate each string crossing... don't leave it too late!

If the content of this lesson is also available in the Library, it will be displayed here. 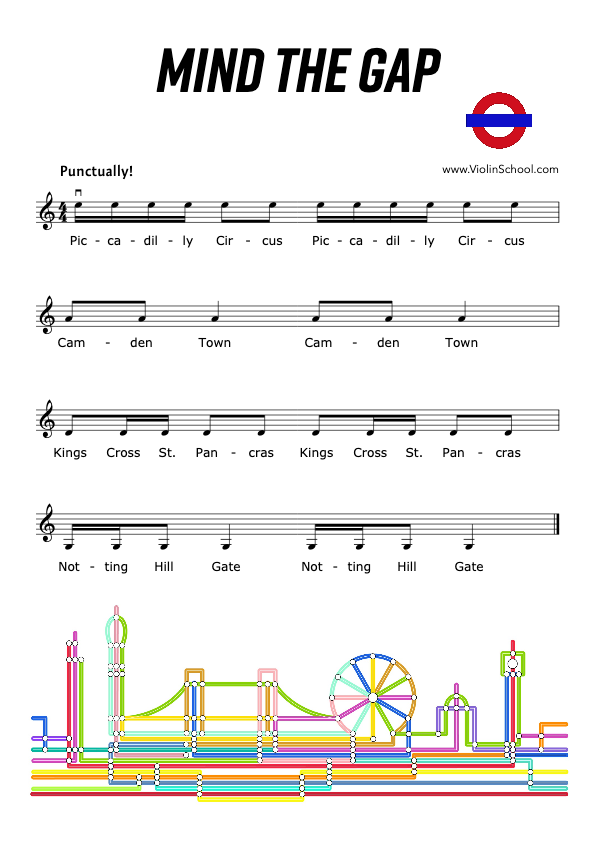 This fun piece uses the names of train stations to practise different combinations of rhythms, including:

... and also combinations of different rhythms:

Use the words to help you find the rhythms. Say the station names out loud whilst you clap the rhythms. Be sure to use a metronome (or the slightly wild playalong track!) to make sure you're clapping and speaking in time with the beat. 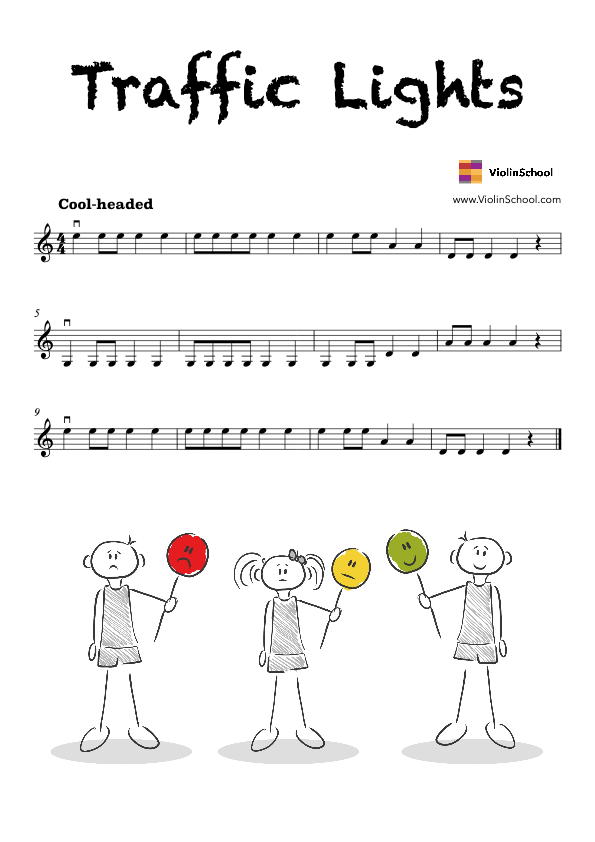 Here's a Playalong Video for you to practise with:

The rhythm pattern for each line of traffic lights is the same. And the first line is the same as the last line!

The second line of the piece is an 'inverted' pattern of the first and third lines. It changes pitch in the same place as in the other lines, but instead of moving to a lower string, it moves to a higher string.

Tip: Think ahead as much as you can! If you anticipate the string crossing, you can make sure that you start moving to the next string in good time, instead of leaving it to the last moment and getting a 'jerky' string crossing. 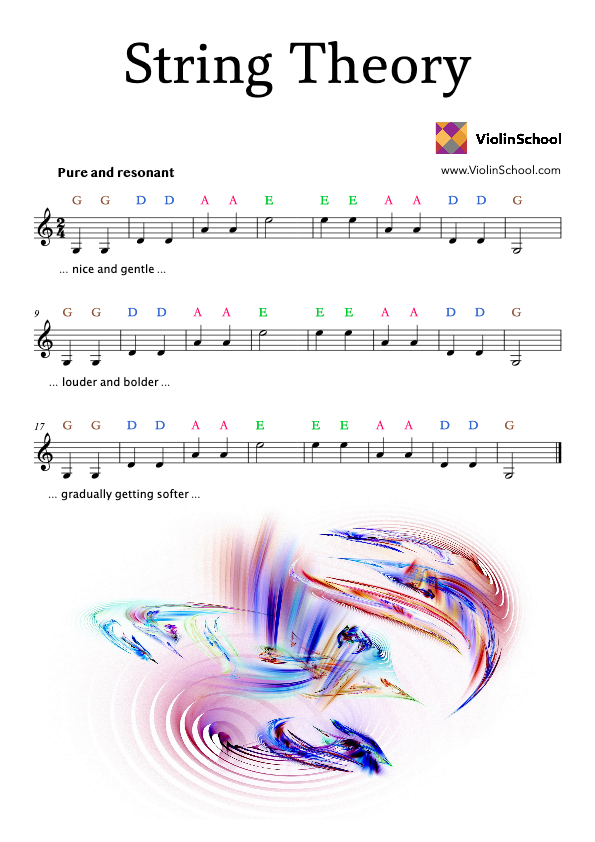 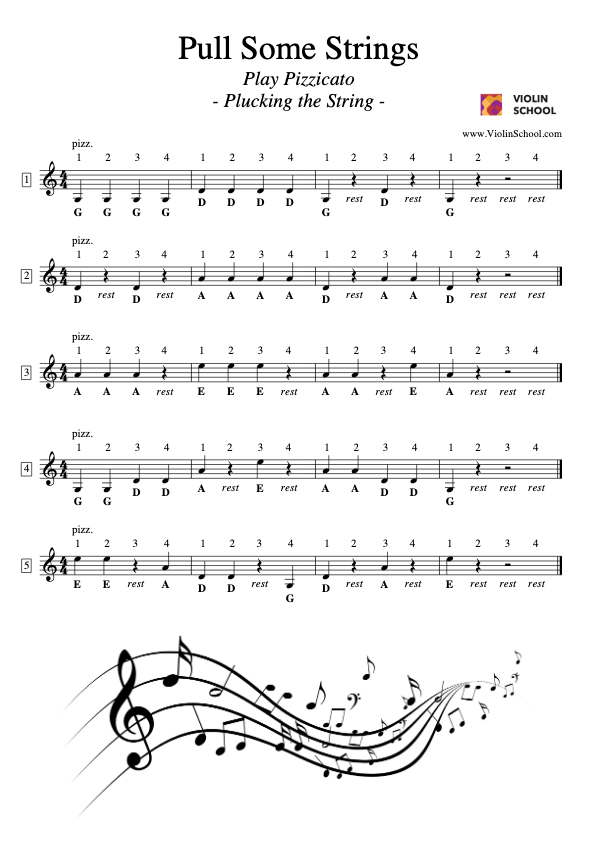 It's time to pull some strings! The technique of plucking the string is called pizzicato or Pizz. for short. Pizz is the opposite of Arco, which means playing with the bow.

We usually pluck the strings with the fingers of the right hand, whilst holding the violin in playing position. We can pluck like it's a guitar too, with the violin under the arm, but that's not so common. So when playing a piece of sheet music it's best to assume that the violin stays under the chin unless it says otherwise.

Most violinists use either the index finger or the middle finger to pluck the string. Try it with both and see which you prefer. Some people even use the thumb to pluck the strings but not the third or fourth fingers. They're too weak and too hard to control.

Nearer to the bridge, the string becomes harder to pull and therefore harder to pluck. There's just too much resistance.

As we move away from the bridge, the string becomes easier to pull. But if we go too far in that direction, then the string gets so close to the fingerboard that it's much more difficult to get a good connection between the string and the finger.

It's best not to play in the gap *between* the fingerboard and the bridge, because it's much harder to control and it doesn't sound so good. Generally we don't pluck the string in the same place that we bow on the string.

There's a practical reason for that too. We don't want to transfer the grease, oil, sweat, dirt and other delightful substances from our fingers onto the part of the string where we'll be playing with the bow. If we do that, it can damage the hair of the bow and make the sound become really strange.

When plucking, keep the hand close to the strings so that everything is nicely controlled. Touch the string, pull gently and release. You shouldn't feel like you're plucking *across* the string, because then you're more likely to accidentally pluck another string at the same time.

Instead, feel like your finger is very slightly *under* the string as you start the plucking motion, and then release it at an upwardly sloping angle.

Experiment with different placements of the finger along the string. This could include different amounts of pull, different angles of release, and so on. Keep experimenting until you find the most pleasing, pure and resonant sound that you can.

Oh... and make sure to keep your fingernails away from the strings. We want to use plenty of the flesh of the finger when plucking, and avoid the nasty hard sound that the fingernails make!